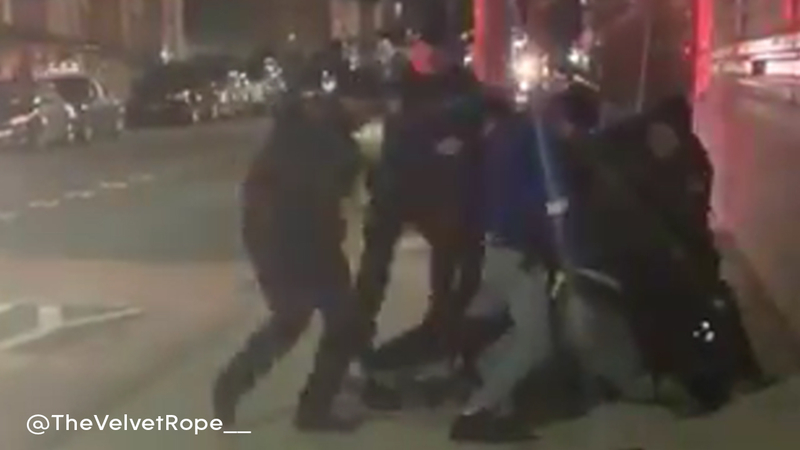 CANARSIE, Brooklyn (WABC) -- A video of police in Brooklyn aggressively arresting a young man is stirring up controversy.

Anti-crime officers in plain clothes were responding to shots fired near the 100% Playground on Glenwood Road between East 100th Street and East 101 Street on Wednesday at 7 p.m., when they say they saw two individuals lighting a marijuana cigarette.

The officers went inside the park and approached the two young men who ran off.

One of the officers called for back up and chased after the individuals, giving one man a summons and arresting the other.

The one who got arrested was caught on camera and shared thousands of times on Twitter.

I’m walking home from work and this undercover cop was holding this man. The guy asked for the cop to identify himself, he ignore that. He asked what crime he commit, he ignore that too. I pulled out my phone. You can hear the guy screaming “I never thought it would happen to me” pic.twitter.com/YW2dI3g8fk

Police say in the video the suspect, 25-year-old Fitzroy Gayle, resisted arrest and refused to cooperate.

Authorities took down Gayle with force and had his ankle stepped on by an officer in the process.

The suspect turned out to be unarmed.

Gayle's family and attorney held a rally Thursday outside of the 69th Precinct in Brooklyn calling on for an investigation.

"My son said, 'Mom, look at the video,'" Gayle's mother said. "And I was like in my head and my stomach is like, I just cannot stand up to no God. I mean my son is not guilty, he's innocent."

"Everything would've been made better if people would not run when police walk up to them, but communicate with police," the mayor said. "And if a police officer tells you that you are under arrest, comply. But with that being said, where we need to get to is a situation where you never see an incident like that."

I just had an opportunity to view this video, and I find it completely unacceptable. I will be reaching out to @NYCMayor and @NYPDShea. Every officer involved should be placed on modified assignment pending the outcome of a thorough investigation. https://t.co/pf2AjUDOCB

The incident is now under internal review.