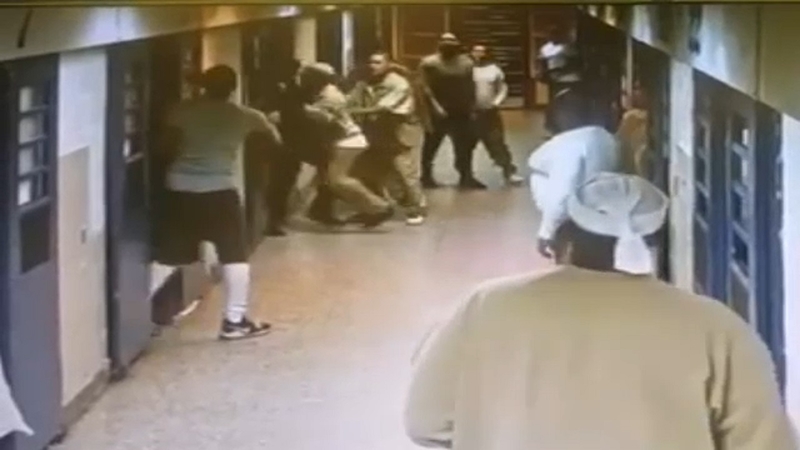 RIKERS ISLAND, New York (WABC) -- Two correction officers are recovering after they were brutally attacked by inmates on Rikers Island.

The two separate attacks happened on Wednesday. The correction officers union has now released security video of the assaults.

In the first incident, a correction officer at the end of a hall at Rikers got pushed up against the wall, then choked and swung at several times by an inmate.

Other inmates initially tried to break up the attack, but then just watched as the assault continued.

The officer was clearly outnumbered.

On the same day, another officer got sucker punched by an inmate while standing in the hallway.

Earlier in November, an inmate pulled a correction officer to the floor and beat his face.

Mayor de Blasio's fix to the problem is to shut down Rikers altogether and replace it with four new jails - one in each borough except Staten Island. With airy light-filled waiting rooms, clean visiting centers and welcoming lobbies, the mayor thinks the nicer environment will help cut down on the violence. However, it is an ambitious plan, and it will take ten years.

In the meantime, after Wednesday's assaults, the head of the correction officers union says,

"These videos show exactly what happens when inmates have no fear of consequences for assaulting Correction Officers, because the City of New York's criminal justice reforms have permitted a culture of violence against Correction Officers."

The Department of Corrections for its part, through a spokesperson said,

"After they were violently assaulted, these brave officers followed their training, showed restraint, and successfully de-escalated the situation."

The inmates are being re-arrested, and will be placed in restrictive housing.