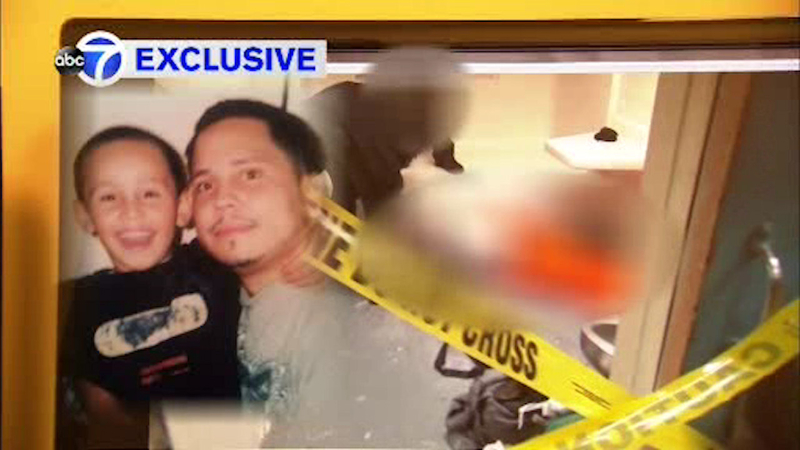 NEW YORK (WABC) -- There is exclusive and disturbing new video of a man in custody after a landlord tenant dispute.

36-year-old Rolando Perez died in his jail cell in Rikers Island, screaming his family says, for his anti-seizure medication that could have saved his life.

"I got to fight through it and become stronger off of it," said Rolando Perez, Jr., son.

15-year-old Rolando Junior is doing his best to grow up without his dad.

His mom is now tackling both roles.

"I wish I still had him. I don't like the fact that he died like that," Perez Jr. said.

"For his dad not to be there is terrible for my son because that was a part of him. He was always with his son on the weekends. He was very close to his dad," said Alexis Rodriguez, Perez Junior's mother.

"Let them know the officer refused his medical attention," you can hear in the video.

In this exclusive video obtained by Eyewitness News, you can hear inmates telling investigators they heard Mr. Perez screaming for his medication, pills he relied on since he was 16 years old to control a severe seizure disorder.

The 36-year-old died in solitary confinement after getting into a fight with another inmate.

He was under arrest for petty burglary back in January 2014; he had not been convicted of a crime.

An autopsy found he died of a seizure and heart problems.

"This is a 36-year-old man who was being held for the suspicion of robbing a television and ultimately received a death sentence," said Jeffery Guzman, attorney.

Guzman is representing Rolando Perez Junior and his mother in a lawsuit against the city.

He's combing through hours of video, and he says what he found is shocking.

"The correction officers have an obligation to walk by and look into each cell once every half an hour. What we know from the surveillance video from the cell block is that the officers never fulfilled that obligation," Guzman said.

An internal investigation found the Bronx man was denied his medication.

One officer was fired.

Seven others including two captains were disciplined, but this family feels it's not enough.

"They look a lot alike. The memories will always be there. That's one thing Rikers can never take away from us," Rodriguez said.