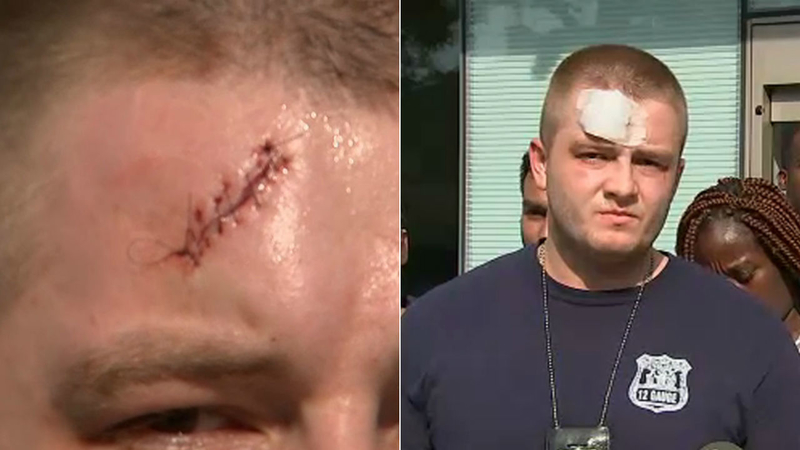 RIKERS ISLAND (WABC) -- Another corrections officer has been assaulted on Rikers Island, the latest of several recent attacks on officers in New York City prisons.

The incident happened around 1:30 p.m. Wednesday at the Otis Bantum Correctional Center.

According to the correction officers union, the officer was attacked by inmates described as gang members.

The officer suffered multiple injuries, including a wide, deep gash on his forehead.

This is the sixth assault in the last few weeks.

The officer was treated at the hospital, receiving nine stitches, and released.

"These people are not in jail for jaywalking or traffic citations," the officer said a press conference outside the hospital. "These people are in jail for a reason. They have nothing to lose, and the different programs they're provided for, they don't work. These inmates don't want to draw and create art in these housing areas. They're in there for a reason. Their mindset is criminal...Cops get hurt all the time. Firefighters get hurt, and it's known. Because we're over that bridge, we're out of sight, out of mind, where the public doesn't know what takes place in those jails."

"This is the product of creating policy based on inmate advocate groups. This is what happens," said the officer.

He emerged from the hospital with the nasty gash on his forehead and lacerations all over his body. The correction officer at times shook with rage at the policies he says led him there.

He was set upon at Rikers as he and his partner patrolled a 50-man housing area, filled in many cases, by violent gang members awaiting trial.

"The mayor through his policies and the commissioner who is in above her head have allowed the inmates to become so emboldened they feel they can do this and get away with it," said Elias Husamudeen of the Correction Officers Benevolent Association.

The mayor's focus has been on shutting Rikers down altogether, citing the violence that has plagued the infamous jail for decades.

"To implement this plan means a complete reshaping of our justice system," said Elizabeth Glaser of the Mayor's Office of Criminal Justice.

The city unveiled a rendering showing airy, lght-filled waiting rooms and other facilities at four so-called community-based jails, one in every borough but Staten Island.

In Manhattan, they'll displace the DA's office and build a 40-story jail at 80 Centre, complete with street level retail and a garage.

But that will take ten years and in the meantime, New York's Boldest say the existing setup may get one of them killed. "Physically these injuries they heal but psychologically it feels like the city doesn't have your back," the injured officer said.

"They're putting our lives in danger, because of their policies," said Husamudeen.

The Department of Correction issued the following statement:

"While not a slashing, today's attack on a Correction Officer on Rikers Island is deeply troubling. The officer, who suffered an injury to his forehead, was taken to a local hospital for treatment. The attack was immediately broken up by two officers. Anyone involved will be re-arrested and placed in punitive segregation."