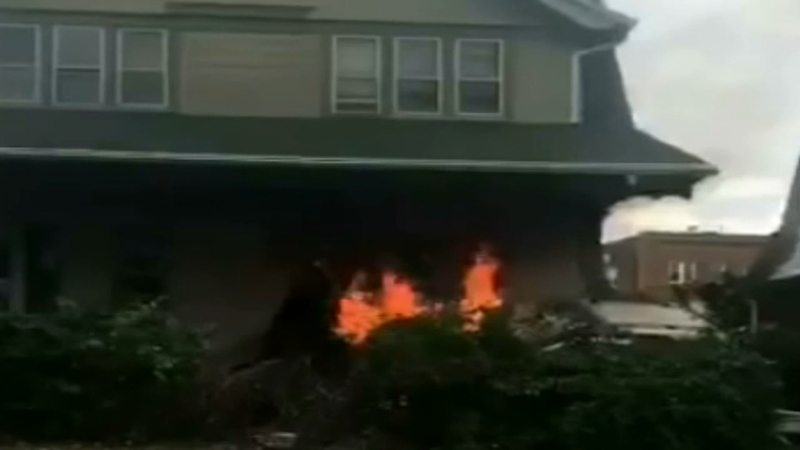 RIDGEFIELD PARK, New Jersey (WABC) -- Two men have been charged in an apparent case of road rage after a car crashed into a New Jersey home, trapping a 94-year-old woman inside.

Police say a white Mercedes lost control and slammed into the house in Ridgefield Park Wednesday.

They were released and given a future court date.

"We were sitting over here and I hear a big bang," said Carmen Roman, a witness.
"Two cars zooming really fast, flooring it, and we hear a really loud crash," said Ibrahim Omar, a witness. "We walk outside and I see one car stuck inside the porch of the house on fire."

The white Mercedes SUV lost control and slammed into the house, trapping the elderly woman who lived there inside. Roman was trying to get her out.

"The guy was telling me to leave the porch because the car was going to explode. I was like, 'I don't care, I got to get Miss McClacken out of here. So then he helped me break everything there so we could pull Miss McClacken out,'" Roman said.
But in the meantime, witnesses and the police say the driver of the SUV was leaving the scene in another car.

"They took off really fast, everyone told them to stop but they took off," Omar said.

Neighbors were just getting home from work.