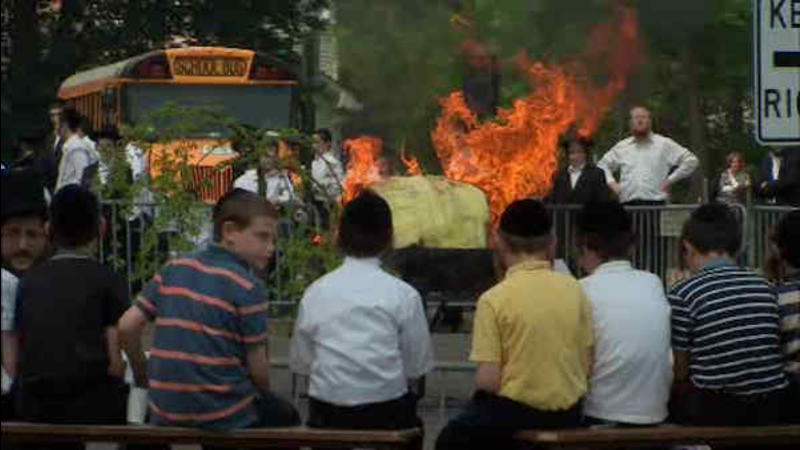 NEW CITY (WABC) -- Just how safe are children when they're in school? In Rockland County alone, nearly 50 private schools -- some that have not filed fire inspection reports in years -- will soon have to under go fire inspections.

The state Board of Education gave the county the authority to conduct 49 inspections because of concerns over irregularities at the local level.

Outside of a yeshiva in Monsey Thursday afternoon, they lit a huge bonfire, with flames licking up from a bundle of cotton soaked in oil as hundreds of schoolboys watched. It comes as concern grows over the fire danger inside certain private schools.

Inspectors carried out the first of the inspections of privately run schools, with most of the facilities yeshivas in predominantly Orthodox Jewish communities in the town of Ramapo.

"We cannot have children in schools that are not inspected," Assemblyman Ken Zebrowski said. "New York state law needs to be enforced."

Officials say 26 schools have not filed proof of inspection in at least three years, and 23 other schools will be re-evaluated after the Ramapo fire inspector was suspended, accused of missing glaring violations that include broken fire exit doors, overloaded extension cords and exposed electrical panels.

"We're asking for every school to understand, you are charged with the protection of children," Rockland County Executive Ed Day said. "I'll repeat it again, is it going to take body bags of children to get somebody's attention?"

The concerns are not new. In 2010, Eyewitness News covered a fire in which emergency crews were delayed entry because of improperly locked doors, some padlocked or blocked by gates. An activist says lawmakers are targeting the Hasidic community.

Based on the severity of the violations, Day said the operators face having the schools shut down or having funding withheld. He also mentioned the possibility of criminal charges.