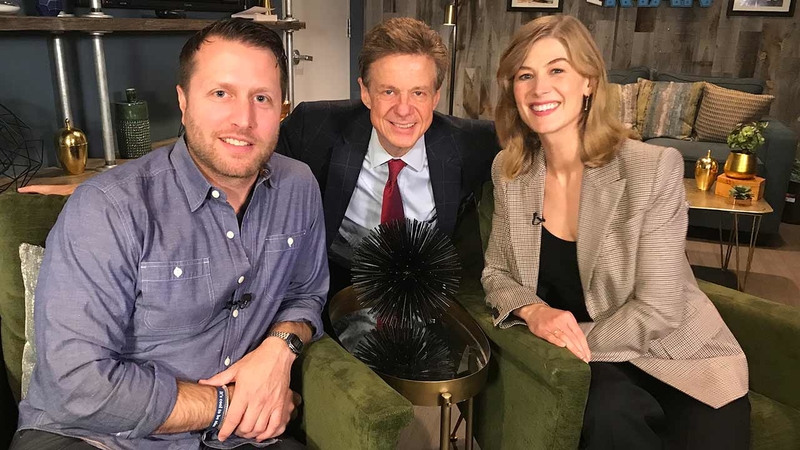 NEW YORK (WABC) -- "A Private War" is a masterpiece and one of the best movies of the year.

Actress Rosamund Pike plays the late Marie Colvin, an American journalist who brought a conflict home to millions of readers by risking her life to show the human face of war.

"She has this total dedication to the truth which is, of course, highly relevant now (when journalism is under attack)," Pike said. "And eventually she was killed for reporting on that truth."

For a decade, Colvin saw more war than most soldiers ever face. She lost her sight in one eye, suffered from alcoholism and endured an acute case of post-traumatic stress disorder.

"You cannot see as much tragedy and suffering as she did without it going somewhere," Pike said.

Her character in the film tells a colleague that she has nightmares every night.

"Never have I been more aware when you read a story," Pike said. "What the cost, the personal cost, of the person who's written it might be."

And she also came to understand why Colvin felt compelled to keep going back to war.

"She responded to the crisis as if it was a crisis in her hometown," Pike said.

"A Private War" is the first motion picture drama from director Matt Heineman, and it has the feel of his exciting documentaries.

"(In a documentary) you follow life as it unfolds in front of you, and so I wanted to bring that ethos of surprise," he said. "Being prepared to expect the unexpected as much as I could into this new world of narrative film making."

"And their tears are real," he said.

This serves to make the entire movie more real.

"It totally blurs the line between truth and fiction," Pike said.

"A Private War" is a tragedy that can be a tough to watch at times, but it's the most meaningful movie I've seen so far this year -- and the most compelling. Trust me, you need to go see it.