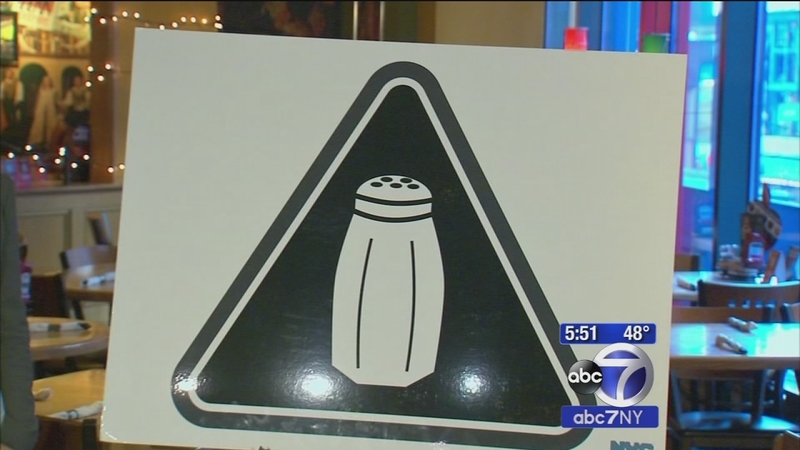 NEW YORK (WABC) -- New York City begins a new era in nutritional warnings this week, when chain restaurants will have to start putting a special symbol on highly salty dishes.

The Department of Health's sodium warning requirement goes into effect Tuesday requiring food service establishments that are part of chains with 15 or more locations nationwide to post icons next to items with 2,300 milligrams or more of sodium - the total recommended daily limit.

This will include combo items, such as an order-by-number meal that might include a soup and a sandwich or a burger and french fries. The rule also requires chain food service establishments to post a warning statement where customers place their orders.

The statement explains that items with the icon have more than the recommended daily limit of sodium and that high sodium intake can increase blood pressure and risk of heart disease and stroke. Leading scientific bodies, including the United States Department of Agriculture and the U.S. Department of Health and Human Services, recommend that Americans reduce their daily sodium intake to less than 2,300 mg of sodium.

New York is the first city in the nation to require chain restaurants to post warning labels next to menu items that contain high levels of sodium. Chains with 15 or more locations have 90 days to comply with the new rule before the possibility of receiving a fine. The proposal was passed unanimously by the New York City Board of Health in September.

"The vast majority of adults in New York City consume more sodium than recommended, and too few understand the link between high sodium intake and hypertension, heart disease, and stroke," Health Commissioner Dr. Mary Bassett said. "These warnings are needed in restaurants because the majority of sodium in our diet is not coming from what we decide to add with the salt shaker at the table, it's already in the food when we buy it. These icons will help New Yorkers make more informed choices when dining out."

But salt producers say the city is acting on misimpressions about the risks of salt in New Yorkers' diets. An international study involving 100,000 people suggested last year that most people's salt intake was OK for heart health, though other scientists faulted the study.

Restaurateurs say healthy eating initiatives shouldn't single out any one ingredient and that the city shouldn't create its own salt-warning scheme when federal regulators are working on new, national sodium guidelines.

"Every one of these cumbersome new laws makes it tougher and tougher for restaurants to find success," New York State Restaurant Association President Melissa Fleischut said when the city health board approved the salt requirement.

The city will start collecting fines on March 1.

In recent years, New York City has pioneered banning trans fats from restaurant meals and forcing chain eateries to post calorie counts on menus. It led development of voluntary salt-reduction targets for various table staples and tried, unsuccessfully, to limit the size of some sugary drinks.