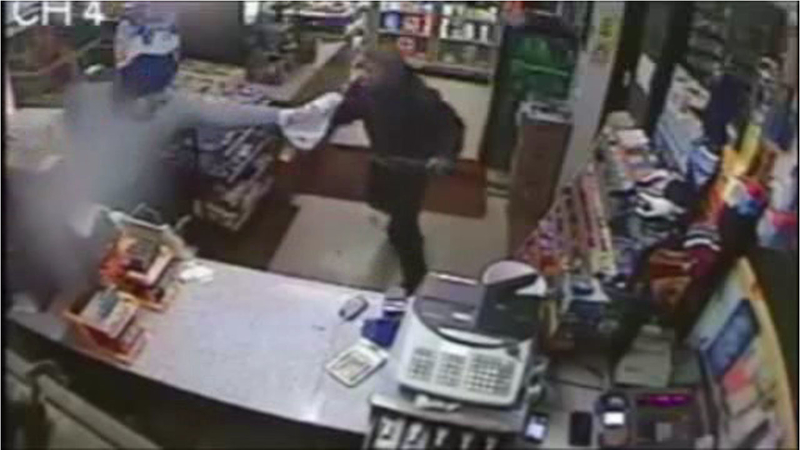 SALT POINT, N.Y. (WABC) -- A convenience store owner in Dutchess County, who used a slipper to fight off a gun-wielding, would-be robber, is talking for the first time about how it all went down.

Surveillance video captured the moment when that store owner refused to give up his hard-earned cash.

"I tell you honestly, I'm not scared," said Amrik Singh, the robbery victim.

Not scared, despite staring down the barrel of a shotgun.

There is dramatic surveillance video from Monday night, when a masked gunman tried to rob Singh's gas station convenience store in Salt Point.

The suspect handed the store owner a bag, and the 58-year old began filling it with cash from the register.

There was a scuffle when the gunman demanded the larger bills he thinks are under the tray.

Things took almost a comic turn when Singh flung a slipper at the suspect, hitting him near the face.

Then Singh rushed the gunman and forced him out of the store.

An outside camera showed him chasing the gunman, but what you don't see is that the suspect fired the weapon.

"I fell down, he didn't get me, but he did shoot it outside in the parking lot," Singh said.

The blast left a hole in the ground. Singh suffered a scraped nose and experienced chest pain, but was not seriously hurt.

Singh has owned Route 9 Mini Mart in Staatsburg for 17 years, and has been robbed once before. This time he fought back.

"Amazing, amazing. I have a little baby so I think I would have thought twice about it, but he just, I guess it was instinct," said Stephen Baudoin, a customer.

Singh says he couldn't get a good look at the suspect, but did manage to grab his mask.

State police are hoping the video will generate leads.

"We did release the video and we are obviously asking for the public's help with any information they can provide regarding this incident," said Lt. Scott Hurley, of the New York State Police.