Emma Stone and 'The Favourite' at the NYFF 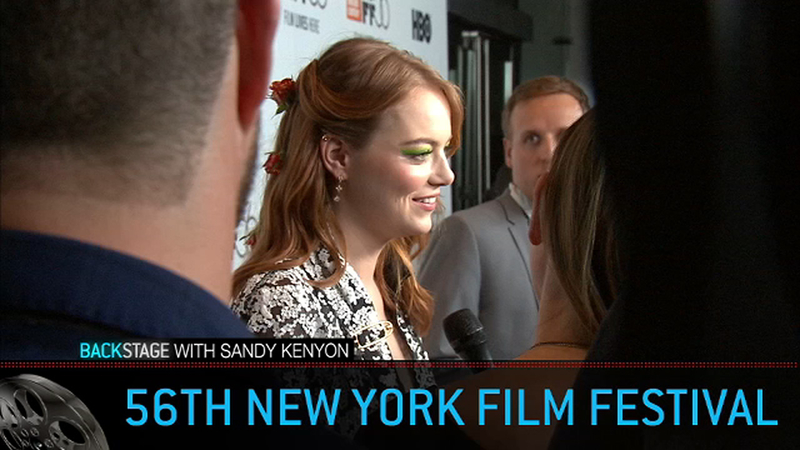 Backstage with Sandy Kenyon: Emma Stone and 'The Favourite' at the NYFF

NEW YORK (WABC) -- The New York Film Festival is a celebration of cinema past, present and future, without regard for box office success.

The 56th annual event kicked off at Lincoln Center, and for the next two weeks, a diverse slate of films from around the world will be shown at Alice Tully Hall.

"For a filmmaker, it's a great honor," said Yorgos Lanthimos, who directed The Favourite. "The audience is really amazing, is very engaged."

"It's amazing," she said on the red carpet. "I live in New York, and I have for only, well, 10 years. So I guess I can't call myself a true New Yorker yet...It's really special to be here and to get to share this movie that we're all so excited about."

Co-star Joe Alwyn praised Stone as a performer and a person.

"She's so down to earth and humble and kind and funny and good," he said. "To get to act across from her and for all of us to hang out on the set for six, seven weeks, was just so fun."

"After winning an Oscar, to go out there and make a bold choice like this and play a difficult role, doing an English accent, which isn't easy at all, I think it shows a testament to what a brilliant actress she is."

The Favourite tells the story of two cousins who scheme against each other in 18th century England.

"I met Yorgos before I even started La La Land for this movie," Stone said. "So it had been a couple years in the making of us trying to work on this together. So it's really special to be here and to get to share this movie that we're all so excited about and proud of."