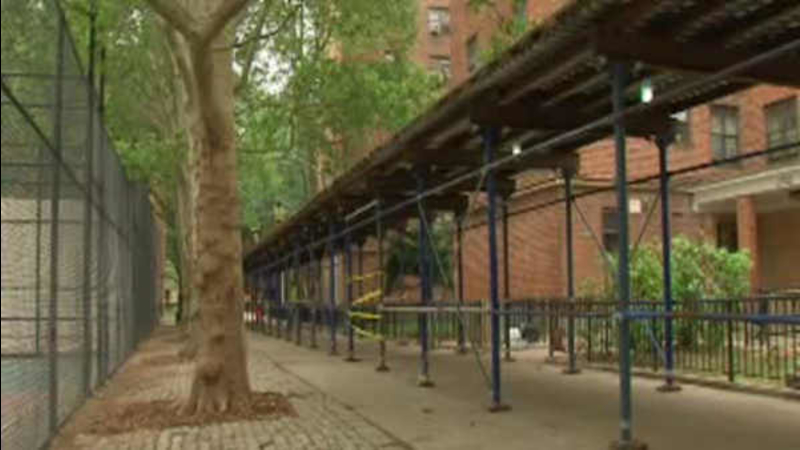 NEW YORK (WABC) -- A new bill is being introduced that will give New York City building owners six months to remove scaffolding.

Residents say there's no way around it, it's an eyesore, often pitched as a temporary safety precaution during necessary repairs to aging buildings.

Jane Foss says scaffolding at her Upper East Side apartment building went up eight years ago, no work has been done, and when it's coming down is anyone's guess.

"They say that the bricks of the facade are loose and with the vibrations of 2nd Avenue Subway construction they might fall and kill someone," Foss said.

Foss says obviously safety is important, but waiting nearly a decade for brick pointing work to be done is outrageous.

"I put in a proposal that would give landlords three to six months to do the work. They wouldn't be able to stop that work at any point for more than seven days. And if they don't do the work, the city needs to step in and do the work ourselves and make bad landlords pay," Councilman Kallos said.

But Frank Ricci with the Rent Stabilization Association says this is an ill-conceived proposal, given some work costs hundreds of thousands of dollars if not millions, and it takes time to get financing and construction plans in place.

"The bridge work is there to protect people walking underneath. Yes it's an inconvenience, yes it hurts businesses on the ground level, but it's a safety issue pure and simple," Ricci said.