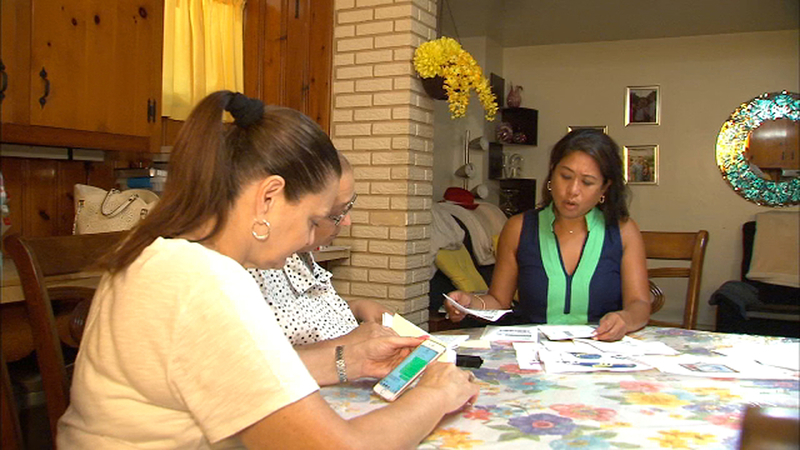 NEW YORK (WABC) -- It's a growing cyber scam, and now, the hackers have even hit Hollywood. Recently, both Tyler Perry and The Rock warned fans their Facebook accounts were hacked by thieves trying to scam money from followers.

But far from Tinseltown, 7 On Your Side found that the devious deception hit two of our viewers. The crooked con seemingly came from Facebook friends offering a million dollars in a bogus government grant.

"I feel like I failed my family, like I can't take care of them," said one victim, who asked to remain anonymous.

Fooled by a fake message on Facebook, she spent her and her sister's life savings, believing they were getting a million-dollar return.

"The text came from my friend, who told me that she had been contacted and she got money," she said.

But it wasn't a trusted friend, it was a fraudster hiding behind a hacked Facebook profile. The con claimed she could get $300,000 through a government program, and all she had to do was send $4,000 to a phony U.S. Health and Human Services agent named "Precious Elizabeth Taylor."

Doreen Caruso was also a victim, targeted through a hacked Facebook account of an old mentor on Wall Street.

"They always take advantage of people who don't know or the elderly," said Doreen's son, who contacted us after she sent $900 via Western Union believing that was the fee for receiving $35,000.

Lured into believing they were getting closer and closer to qualifying for a grand prize, she mailed money six times and sent off a grand total of $55,000, believing a million dollars would be delivered to her doorstep.

"We just kept going to FedEx and mailing money," she said.

They mailed to addresses all across the country -- Texas, Louisiana, Florida, even an address in Yonkers where two payments of $10,000 were sent to "John Miller."

We went to the address and checked it out.

"No FedEx came here filled with cash," the resident said. "No envelope came here for no John Miller."

The resident questioned why anyone would be sending out money with the promise of getting money for free.

Facebook is aware of this scam and has published a Facebook user warning, complete with tips on how to spot the ripoff, and company officials said they block millions of fake accounts at registration every single day.

The big takeaway is to always remember you should NEVER pay up front for grants, prizes or employment, even if you get a check.

Next, pick up the phone. If you get direct messaged, call your friend or call the agency directly. Do not call the number the scammer texts you.

If you suspect you or your friends' social media accounts have been hacked, report it to Facebook, Instagram or Snapchat.

And remember, a request for cash, money cards, Western Union wires for grants, IRS debts or prizes are almost always a scam.

Two factor authentication for Facebook now easier to set up

If using the app, click here to send us a news tip
Report a correction or typo
Related topics:
personal financefacebookscam7 on your side
Copyright © 2022 WABC-TV. All Rights Reserved.
7 ON YOUR SIDE
Restaurant loses weekend of business over untimely gas inspection
Tips winterize your home and keep gas, electric bills low
How to get reimbursed for at-home COVID tests
7 On Your Side: Tips for ordering your free at-home COVID tests
TOP STORIES
Winter Storm Update: Tracking the nor'easter
How much snow in NYC, Tri-State area
NY battered by high winds, blanketed in heavy snow from nor'easter
Winter hurricane? What is a 'bomb cyclone' or 'bombogenesis'
Winter nor'easter: LIRR suspended, other mass transit info
Snow blowing sideways in NJ from nor'easter
Parts of Connecticut could get 2 feet of snow, Gov. Lamont warns
Show More
Share weather photos and videos here
AccuWeather Alert: Heavy snow, wind
Widow delivers heart-wrenching eulogy for NYPD Detective Jason Rivera
Final farewell for NYPD Detective Jason Rivera
'I can't believe I'm alive': Man shoved onto subway tracks speaks out
More TOP STORIES News
Send us your questions, issues, and story ideas to Nina by filling out the form above, by emailing 7OnYourSideNina@abc.com, or contact Nina on her Facebook page or tweet her at Twitter @7OnYourSideNY! You can also call the 7 On Your Side Hotline at 917-260-7697.