Study: Double whammy of fault lines could trigger 'Big One' 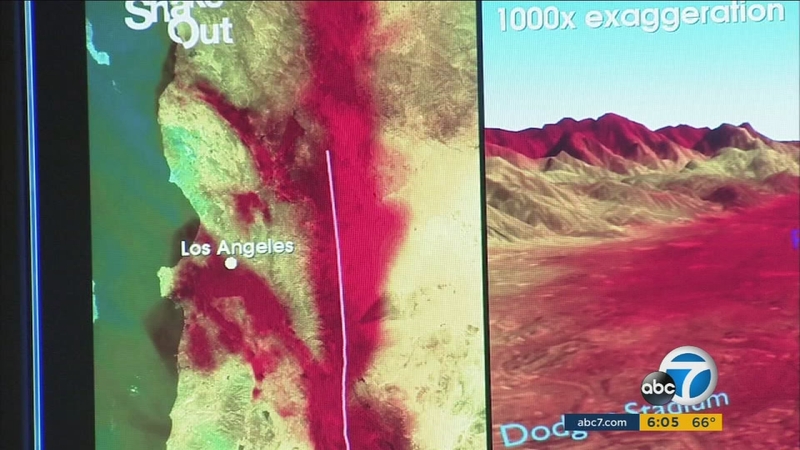 Double whammy of fault lines could trigger the next 'Big One' quake, study finds

PASADENA, Calif. -- The infamous San Andreas Fault gets all the credit for being the likely cause one day of "The Big One" - a massive earthquake that would cause enormous devastation in terms of lives lost and buildings destroyed somewhere in Southern California.

But new research is showing a more likely culprit could actually be a smaller fault line.

An eruption by a smaller fault could trigger the larger fault and together they would create an unprecedented double whammy of destruction, researchers say.

The study by a Stanford postdoctoral fellow is based on new research into one of the biggest quakes in California history - a 7.5 magnitude temblor that struck the Wrightwood area on Dec. 8, 1812.

Traditional analysis has blamed the quake only on the San Andreas Fault.

But the new study from Julian Lozos, now an assistant professor at Cal State Northridge, theorizes that it was actually the smaller San Jacinto Fault that ruptured first. Its energy moved north and crossed over to the San Andreas Fault near the Cajon Pass and the two faults acting in tandem caused the massive quake.

The 1812 quake resulted in about 40 lives lost and damage to some Spanish missions, according to the U.S. Geological Survey - a relatively low figure compared to its magnitude because the area was sparsely populated back then.

But its power in a populated area of modern-day California would be far more destructive. By comparison, the smaller 1994 Northridge quake, which caused about 60 deaths and billions of dollars in property damage, was listed at 6.7 magnitude.

Last year, the USGS upped the chances of a magnitude 8.0 earthquake happening over the next 30 years to 7 percent, up from earlier estimates of 4.7 percent.

USGS experts said the revised estimate was because of new insights into the possibility of multi-fault ruptures.