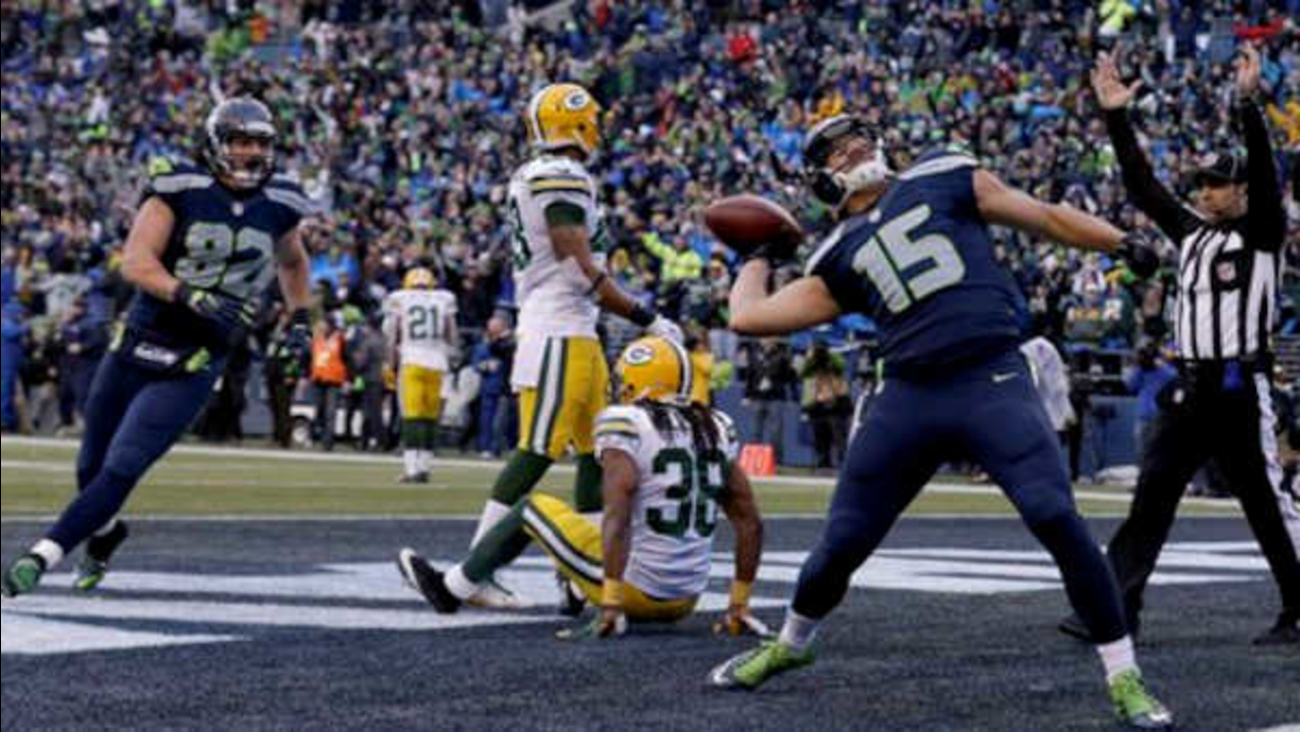 SEATTLE -- Never doubt the resilience of the Seattle Seahawks.

Plagued by turnovers and outplayed much of Sunday by Green Bay, the Seahawks staged an improbable comeback and beat the Packers 28-22 in overtime. Russell Wilson, who struggled until the final minutes, hit Jermaine Kearse for a 35-yard touchdown 3:19 into the extra period on the only possession.

The Seahawks became the first defending champion to make the Super Bowl in 10 years, and will play the winner of the AFC title game between Indianapolis and New England. How they got there was stunning.

Seattle (14-4) trailed 19-7 with about four minutes remaining and had been ineffective on offense all game. Wilson finally put a drive together with passes to Doug Baldwin and Marshawn Lynch - initially ruled a touchdown but called back because he stepped out. Wilson finished with a 1-yard scoring run to cut the lead to 19-14 with 2:09 left.

Seattle recovered a bobbled onside kick at the 50, and Lynch sped and powered his way to a 24-yard TD run. Wilson's desperate 2-point conversion pass was hauled in by Luke Willson to make it 22-19.

Then Aaron Rodgers led the Packers (13-5) to Mason Crosby's fifth field goal, from 48 yards with 14 seconds to go to force overtime.

Then Wilson and Kearse struck, with Kearse - the target on all four interceptions Wilson threw - beating Tramon Williams on the winning pass. Kearse caught the winning TD in last year's conference title win over San Francisco, too.

"Just making the plays at the end and keep believing," said Wilson, who was overwhelmed and sobbing after the game. "There was no doubt ... we had no doubt as a team."

Kearse, who has caught touchdown passes in four straight postseason games, and several other Seahawks leaped into the stands behind the end zone, saluting the stadium-record crowd of 68,538. Wilson ran through cameramen to jump on Kearse's back, and defensive end Michael Bennett borrowed a bicycle from a police officer and rode around the edge of the field saluting the "12s."

Until the final minutes, there seemed to be no doubt the Packers were headed to the big game Feb. 1 in Glendale, Arizona. Despite All-Pro quarterback Rodgers' injured calf that had him limping much of the game, Green Bay and its overlooked defense was carrying the day.

But special teams trickery lifted the Seahawks back into the game after falling behind 16-0. Their first touchdown came on a fake field goal when holder Jon Ryan threw 19 yards to tackle eligible Garry Gilliam in the third quarter. After Wilson made it 19-14, Chris Matthews recovered the onside kick that Packers tight end Brandon Bostick couldn't gather.

Lynch, who rushed for 257 yards on 25 carries as the one consistent offensive force Seattle had, wouldn't be denied with 1:25 remaining.

The 16-point comeback was the largest ever in a conference title game. The Colts defeated the Patriots after trailing 21-6 in 2006.

And after the Packers tied it, Seattle wouldn't be denied in overtime, winning the coin toss and going 87 yards in six plays.

"It takes everybody and everybody had to contribute to get that done," coach Pete Carroll said. "It was so much heart, so much belief today. Somehow, somehow we pulled it out."