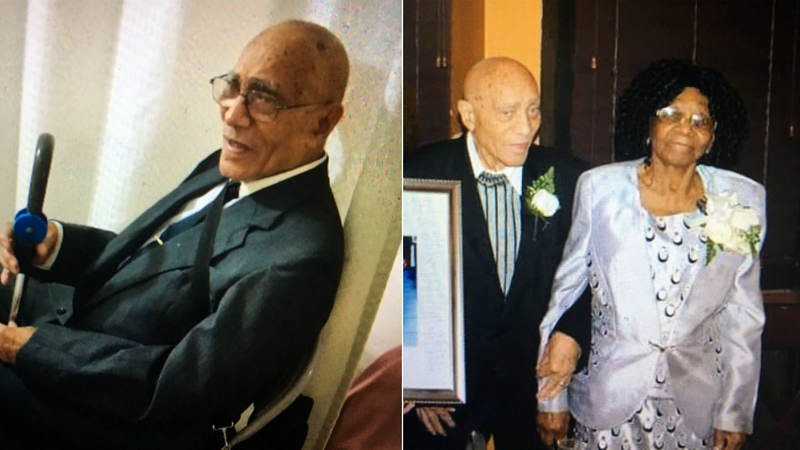 BEDFORD STUYVESANT, Brooklyn (WABC) -- Police in Brooklyn continue to search for suspects in a home invasion that left an elderly man dead in Brooklyn, though sources say they know for whom they are searching.

Ninety-one-year-old Waldiman Thompson died after being tied up along with his 100-year-old wife, Ethline. It happened Wednesday afternoon on Decatur Street in Bedford-Stuyvesant, where several suspects targeted their home.

Police say the couple was inside their bedroom when the suspects came in, put sheets over their heads and tied them up. Ethline was able to free herself and call 911, but her husband was unresponsive when police arrived.

An autopsy found Waldiman Thompson died of sudden cardiac arrest in a person with hypertension and atherosclerotic (cardiovascular disease). The death was classified as a homicide.

Authorities are looking into whether the incident may have been targeted, since the suspects made off with approximately $5,000 in cash. The Thompsons reportedly collected rent from tenants in their building, and investigators say the suspects knew where that cash was inside the apartment. Authorities questioned and released the victims' great-nephew, saying they no longer consider him a person of interest in the case.

"He doesn't deserve to die like this," the victim's niece, Karlene Grose, said. "And this brutality, what they did to him, it's terrible."

Ethline Thompson was treated for superficial marks around her legs consistent with being tied up. She returned home briefly Thursday night, escorted by police officers, to collect some belongings before heading to an undisclosed location.

100 year-old Ethlin Thompson returned home, showed cops where robbers tied up her & husband. But in denial husband gone, asking where he is. pic.twitter.com/PS9Xdm9Wv2

She is said to be physically OK, but sources say psychologically, she is fragile. Married for more than 30 years, she is still wondering where her husband is.

Her great-niece said she is a woman of faith.

"She said she forgives whoever done this," Dorene Hunter said. "And I don't know how she has the courage to say that, but I admire her for that."

Neighbor Lawrence Randolph said the couple lived next to him for more than 20 years.

"He was always kind to me and always saying something that I need to know about my life," he said. "So they've been good to me."

Investigators remained on the scene Thursday. Police say that so far, there have been no signs of forced entry, and tenants say the Thompsons would not have let in someone they didn't know.

"They'd ask who it is first, and then open," tenant Anil Lopez said. "There's two doors, actually, going into their place. So they wouldn't open for strangers."

The vague details led some to believe the well-known couple may have been targeted in the gentrified section of Bed-Stuy.

"We're in New York, so there's bad things that happen all over the city," neighbor Michael Rice said. "But very specifically for this neighborhood, to have something like that happen here, I'm just really shocked."