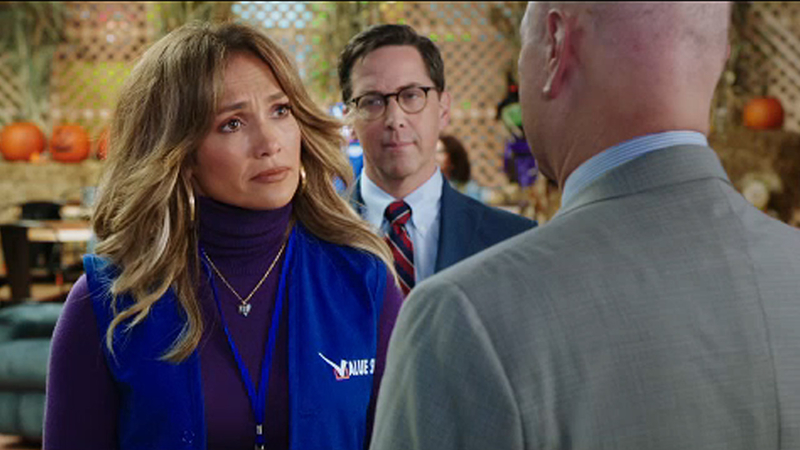 NEW YORK (WABC) -- I have to resist the temptation to call her "Second Act" a new low for Jennifer Lopez, because her appearance opposite then-boyfriend Ben Affleck in "Gigli" was so bad it'd be pretty much impossible to do worse.

So let's just say this movie isn't as good as "Maid in Manhattan," though its plot is eerily similar.

"I just wish we lived in a world where street smarts equaled book smarts," says Maya Davilla, played by J-Lo.

We find her making the most of her job at store in Queens, where her best friend is played by real life bestie Leah Remini.

Maya quits after being denied a promotion she clearly deserves, and her godson works up a bogus resume that has her graduating from Harvard and hobnobbing with the Obamas. It lands Maya near the top of the corporate ladder at a company developing the same sort of beauty products she used to sell.

Given all the lies necessary to keep her gig going, Maya does pretty well. She even fakes speaking Mandarin Chinese.

Scenes with her rival, played by Vanessa Hudgens, are the best, though you will figure out the plot twist involving the two of them long before it's revealed.

The rest of the cast, including Treat Williams as her boss and Milo Ventimiglia as a love interest, are solid enough. But not once did I think Maya was anybody other than the world famous Jennifer Lopez strutting through a movie I just can't recommend.

Watching this movie in a theater full of J-Lo fans was a trip through an alternate reality, where even the lamest jokes are funny and the most unlikely situations seem true.

I wanted to get a second opinion on "Second Act," so I asked high school senior Arthur Potter to accompany me. He sided with the audience, saying he walked away from the screening with a tear in his eye and a warm feeling inside.

The varsity athlete calls this a "great, date movie." I say it's for J-Lo fans only.