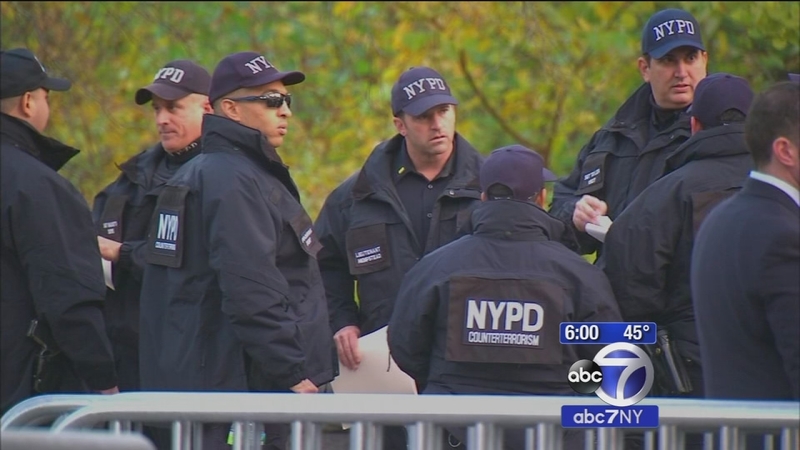 NEW YORK (WABC) -- Terror concerns have prompted a worldwide travel alert, with the State Department urging Americans to avoid large crowds or crowded places and saying the likelihood of terror attacks will continue as members of ISIS return from Syria and Iraq.

Of course, here in the Big Apple, crowds will gather on Thursday for the annual Macy's Thanksgiving Day Parade. And now, we're learning more about how the NYPD is working to keep spectators safe.

The NYPD heavily mans the balloon event and the parade every year, but this time, the number of officers is greater and with new specialized units.

"We have to be on our toes," the NYPD commander said.

Roll call is different this time for some NYPD officers. They are assigned to the run up to the Macy's Thanksgiving Day Parade, where thousands flock to see the balloons inflated, their assignment is laid out for them.

"I need you to inspect your post right away. Take a look for suspicious packages. Any events we see out there, we want to find them now while there is daylight out," the commander said.

Security, this year after the Paris attacks, is much tighter and with the city on a higher alert, there are more officers on the streets.

"We live right near where the balloons are being blown up, where everybody is going to be lining up. And we are planning to stay put for the holidays. And we are not particularly worried about it because the police have it under control," said Erica Reiner, an Upper West Side resident.

"I saw a police officer with a machine gun yesterday which I hadn't seen in town in other years," another resident said.

Also rolled out is the new Critical Response Command, which has up to 500 heavily armed and highly trained officers added to the Counter Terrorism Unit.

"That is kind of alarming to see them with the rifles like that. I know the intention is there and it's good so I do feel protected," said Octavious Brown, a New York City resident.

As thousands of people move along West 77th Street to see the giant balloons being inflated, Hammer, one of several bomb sniffing dogs was also working.

They are being joined by other officers with radiation detection devices able to detect a dirty bomb.

"Have a safe tour out there, keep your eyes open, and keep everybody safe," the commander said.

"And just the very large crowds, work with us," Police Commissioner William Bratton said. "Work with us on the crowd management and crowd control. And if there is something that they see makes them feel uncomfortable, certainly make us aware of it."

Bratton encouraged people to come down and enjoy the parade, saying it is expected to be "one of the most beautiful days we've had in years."

"People should have no fear," he said. "What we would ask, though, is awareness."