Slain security guard "loved job", should have been off at time of shooting 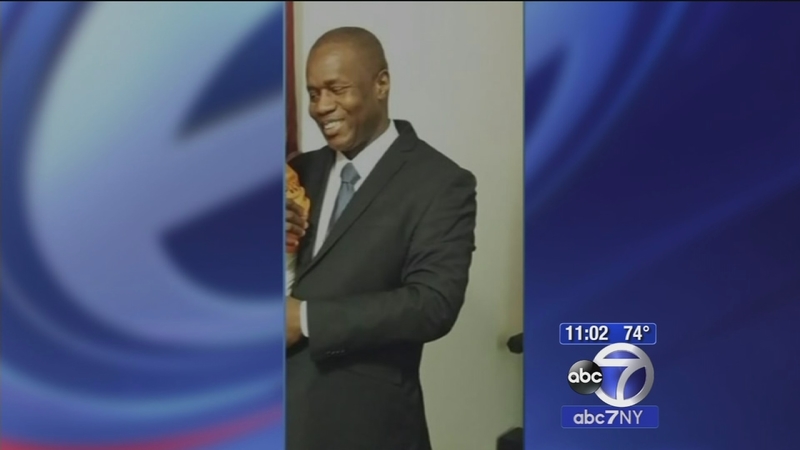 NEW YORK (WABC) -- The family of a security guard who killed while working at a federal building downtown Friday is now planning his funeral.

A cousin said Saturday that the family is trying to decide if Idrissa Camara, 53, shot and killed at work on Varick Street, will be buried in the United States or in his native Ivory Coast.

Eyewitness News talked to Camara's family and friends on Saturday, and they say that not only did he love his job as a security officer, but the armed guard never felt like it was a dangerous job. Camara often sent the money he made here back to extended family members in the Ivory Coast.

For most of the day, family and friends came to Camara's home, all giving condolences to his wife and four children.

"If someone has a problem, we come to share the grief with them, and support them as much as we can," says Vakoua Diomande, a family friend for 15-years.

Camara's cousin, and leader at the family's Harlem mosque tells Eyewitness News that the family is holding up well.

Kevin Downing, 63, of Fort Lee, N.J., entered through a side entrance of the building that houses an immigration court, passport processing center and a regional office for the Department of Labor, a law enforcement official said. He shot Camara at close range, then walked through the screening area and headed toward an elevator where he encountered another employee, and then shot himself in the head, said James O'Neill, a chief with the New York Police Department.

Camara, was supposed to have gotten off work at 4 p.m. but agreed to stay on for an extra shift, FJC Security Services said. The shooting happened at 5:05 p.m. He was pronounced dead at a nearby hospital.

Camara's sister wept as she left the family's Harlem home.

She's devastated by the news that her brother won't be coming home to his wife and four children.

His son posted a tribute on his Facebook page, thanking friends for their support:

His brother rushed to Lenox Hill Hospital to be with them during this tragic time.

A spokesman for FJC Security Services, the company Camara worked for, released a statement saying,
"Tonight, for the first time in our 27-year history, FJC Security Services lost a member of our family when Senior Guard Idrissa Camara was shot at 201 Varick Street. He later died at Lenox Health Greenwich Village.
"Idrissa Camara, 53, of Manhattan, worked for FJC for two years, when we took over the contract at that building. He worked for the prior company and we were pleased he stayed with us during that transition.
"Camara, who was armed, was an extraordinary Senior Guard who was well trained, cared deeply about his job and knew that building better than anyone else. It's clear from the facts that he never had a chance to defend himself in this instance.
"Camara was scheduled to complete his day at 4:00 PM, but agreed to stay on for extra duty. That speaks volumes about the person he was.
"Our thoughts and prayers are with his wife and family. We intend to do everything we can to stand with them during this very difficult time.
"As part of our investigation, we have checked our records for any link between the shooter and FJC. Our search found no connection."

The union, 32BJ, also released a statement saying, "We are shocked and horrified at this terrible news and send our deepest condolences to Officer Camara's family. Security officers around the city and country serve on the front line each and every day to keep us safe and secure. We are heartbroken that one of our own has fallen. We hope some of our questions in the face of this terrible tragedy will be answered. For now, we are keeping Officer Camara's family and loved ones in our thoughts and prayers."