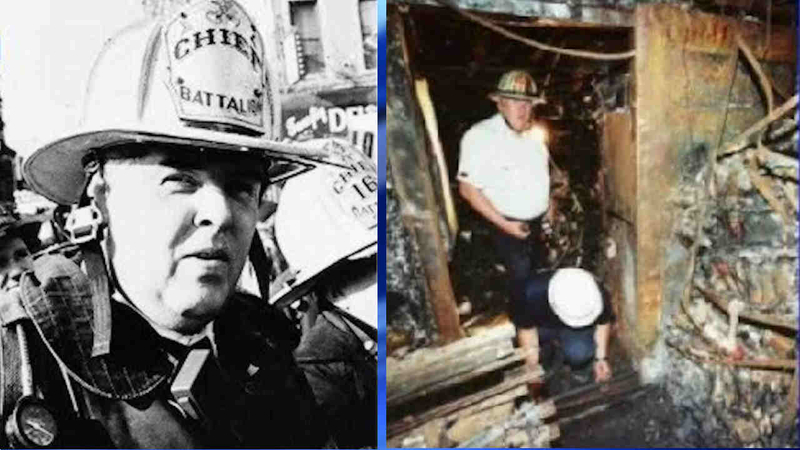 NEW YORK (WABC) -- A funeral was held Friday for an FDNY battalion chief who died at the World Trade Center on 9/11.

The service for 58-year-old Lawrence Stock was delayed year after year because his remains were never found, until his family learned he had donated blood just before the terror attack.

The long and painful wait was finally over, as family, friends and brother firefighters from New York City and beyond gathered at Saints Philip and James Roman Catholic Church in St. James on Long Island to pay tribute to a fallen hero. Several thousand firefighters lined the street outside.

Stack served the department for 33 years and died along with 342 of his fellow firefighters at the Twin Towers. His remains were never recovered, but the chief's family located blood he had donated in a blood drive for a child with cancer. The only known traces of Stack were carried into the church, where Mayor Bill de Blasio and FDNY Commissioner Daniel Nigro joined hundreds of mourners.

"There was always a lot to learn from Larry, and there still is," de Blasio said. "We vow to never ever forget."

Stack was remembered as a selfless man and dedicated firefighter who died trying to help a victim escape the towers before they collapsed. He was the son of a New York City firefighter, and both of his sons followed in his footsteps.

Lt. Michael Stack said during the funeral service that his father, who was a safety expert with the department, had been working in his office preparing a report on the deaths of three firefighters killed exactly 15 years ago Friday - June 17, 2001. When he learned that planes had flown into the World Trade Center, Stack raced to the scene and began helping people flee the burning towers.

"He was not required to respond to the World Trade Center, but he knew that he would be needed," Nigro said. "And he responded on his own."

Afterward, the casket bearing the blood vials was placed on top of a ceremonial firetruck, flanked by Stack's firefighter sons, and the strains of bagpipes filled the air as the procession departed for Calverton National Cemetery.

According to the FDNY, Stack served in the United States Navy for six years, including a tour of duty in the Vietnam War.