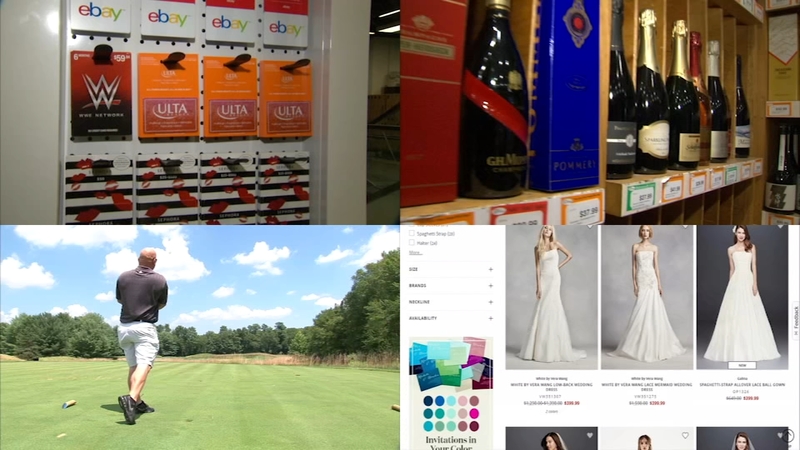 NEW YORK (WABC) -- December is here, and so is the holiday shopping rush. Before you hit the mall though, there are some things you can save big on that you wouldn't expect.

They may not seem like the most creative stocking stuffers, but according to a WalletHub survey, gift cards are the most desired gifts of all this holiday season. And luckily for you shoppers, we're likely to see a flood of promotions in December, with discounted gift cards to suit all interests - from Domino's to GameStop. You can expect to see ever-popular $100 iTunes gift cards fall as low as $84, while the best price for a $50 card last year reached a low of $43.

Last December, Target even knocked 10% off all Target gift cards in its best-ever promotion, while Raise.com cut $10 off gift card orders of at least $20, which was that store's best coupon offer of the year.

It's not just cheap gift card offers that will help you save, either. Many retailers offer bundle deals come December that will save you big bucks at the most popular stores. Last year, Dell offered gift cards worth up to $250 with TV and game console purchases, which helped undercut prices at Amazon and Best Buy. Starbucks also hosted one of the most popular deals of the month, as it gave away $5 gift cards with every $10 spent on holiday coffee.

We may have seen slightly more toy deals in November of last year, but December is when all things LEGO, Fisher-Price, and Barbie traditionally plummet to their best prices of the year. In 2016, a quarter of all toy and hobby deals were at Editors' Choice prices in the run-up to the holidays, which makes it the very best time of year to buy.

Amazon knocked 40% to 80% off in one of its best toy sales of the year last December, with some prices at 75% less than what any other store offered. Big discounts on Star Wars toys at shopDisney and Best Buy were among the most popular of the season, too. We expect to see similar promotions on The Last Jedi merchandise two weeks before Christmas.

Know that the bulk of the best LEGO deals came from Toys"R"Us and Target, with the former knocking 40% off and offering free shipping on a selection of sets in the second week of December.

It should come as no surprise that holiday decorations will see their biggest discounts from December 26 onward. Both Home Depot and Walmart will likely be the first to slash prices on all things festive again this year, as they each knocked around 50% off all inflatables just days after Christmas last year. Expect festive lights to fall to around $5 after the holiday, while those highly discounted inflatables should start at just $14.

If you must buy before the big day, however, look to Target, which offered the best sale on holiday decor in the days leading up to Christmas - with artificial trees falling to half price. Expect pre-lit trees of all sizes to sell from around $40 in the days before Christmas. Also, keep in mind that fresh-cut trees will start seeing steep discounts from around December 20.

We know, Black Friday is simply the best time of year to buy a TV. And that's true. But you can still save big bucks on discounted units through the first weekend of December. In fact, you can find retailers offering TVs for as much as 30% less than what they'd cost at other stores.

Last year, we saw the cheapest-ever 65" 4K Smart TV fall back to the Cyber Monday price of just $600, while Dell continued to offer all-time lows into the weekend. These end-of-week deals are perfect for those too busy spending time with family or working to shop Thanksgiving and Black Friday deals.

Black Friday and Cyber Monday apparel sales may look alluring, but you should know that not all things sartorial fall to their best prices of the year in November. Winter apparel - most notably coats and jackets - doesn't reach all-time lows until winter is in full swing in December. In fact, a substantial 24% of all coat deals were marked Editors' Choice in this month last year, as opposed to just 16% come the January sales.

Most of our favorite stores offered at least 50% off outerwear last December, but Amazon won out by slashing up to 75% off a wide selection of coats during the second week of the month. You can expect to shop generic fleece jackets for men and women from as little as $5 at Walmart, while big-brand outerwear like Columbia and Reebok pieces could plummet below $20.

Cold weather accessories can also be found at budget-friendly prices. Look to Old Navy, as it offered a whole host of microfleece hats, gloves, scarves, and socks for just a buck in-store last year.

Although Black Friday is generally the best time of year to shop previous-generation Apple gadgets, if you don't score a great deal on the iPhone 7, 8, or the more recently released iPhone X, never fear! December promises to bring a host of impressive savings with it, too.

Last December had some of the best deals on the iPhone 6 - we actually saw the year's all-time lows on the iPhone 6 16GB and 128GB models that month. As such, we're expecting strong iPhone 7 offers to hit our inbox this month. We've already seen the 2016 release fall to $450, but anticipate that it will fall as low as $400 before the end of the year.

Best Buy hosted a BOGO free contract offer on the recently released iPhone 7 last December, so we're looking to that store to drop another budget-busting deal toward the end of this year, too.

December's jewelry deals may not be jaw-dropping, but know that we'll see the best offers of the coming months in the run-up to the holidays. Whether you're shopping for Christmas gifts or thinking ahead to February, you'll get better deals on diamonds and pearls in December as compared to Black Friday and Valentine's Day sales.

Be sure to shop Target, as the store hosted the best sale of the month in this category last year, when it knocked 40% off all jewelry and watches. Amazon's daily deal section should also be on your radar, but those who are really strapped for cash should click through to Tanga or Jewelry.com, as both stores offered freebie jewelry pieces last December (the former when you paid for shipping, the latter with any other purchase). Elsewhere, diamond earrings started at around $20, while AAA pearl necklaces sold for as little as $38.

If you're partial to the good stuff, know that you can cut costs on luxuries like champagne. And according to Reader's Digest, December is the very best time of year to splurge on bubbly, as competition drives prices down during the busy party season - GuildSomm even found that 22% of all champagne sales are rung in during this month. Shoppers can save around 50% on their purchases by hitting the stores in mid- to late-December.

Wedding dresses traditionally hit their best-ever prices in December for many reasons. Bridal stores try to offload dresses in order to boost end-of-the-year sales, but also to clear the shelves for the influx of new styles they'll receive at the end of the year. Wedding expert Linda DiProperzio told Fox Business that you can save up to 30% on your dress purchase if you don't mind buying last season's styles.

Like with most outdoor activities, the golf season tames as the cooler weather begins, and so December is a great time to buy a new set of clubs. Retailers will be looking to clear out their inventories in time for the release of new lines come the new year. Last December, we saw adidas Golf host its best sale of the year (which tied its Black Friday offering) by knocking a combined 47.5% off all already-reduced golf gear.

December has plenty of holidays to look forward to, but we like the sound of National Cookie Day the most. On December 4, you don't need to spend a single cent, as many top stores and restaurants will offer free baked goods on that day. Last year Hershey's offered a free bag of cookies via supermarket coupons, while Insomnia Cookies gave out a free treat when you made any purchase that day. Whole Foods even got in on the celebration by discounting all its freshly baked chocolate chip cookies to just 25 cents!

WAIT TILL JANUARY TO BUY:

If you're planning to shop premium electronics, know that many top brands introduce new models of high-end computers and top-of-the-range TVs at the Consumer Electronics Show in January. As a result, 2017 models will generally hit better prices when the new lines of futuristic tech are announced in Las Vegas. (Of course, not everything follows this cycle; smartphones tend to be announced in late spring, while Apple products keep their own individual annual schedule.)

Following the event, from the second week in January, look for deals on sophisticated tech like smart home appliances, 3D printers, and VR headsets.

Gym owners and fitness retailers alike know that January is most people's month of renewal, so they'll drop their best discounts of the season come the new year. We've also found that January sees around double the number of deals on exercise equipment compared to December - with prices on dumbbell sets hitting just $5 in the month, and exercise bikes starting at around $60.

You may be planning to buy tickets for your favorite show this Christmas, but know that January will see far better discounts on all-things Broadway. Not only is it regarded as a slow month on the scene, but January will see the return of Broadway Week (running between January 16 and February 4). That's when you can shop highly discounted tickets and even score BOGO free offers for many popular showtimes.

You can book these low-cost concessions from January 5. So, consider buying a gift card for your Hamilton-crazed loved one instead of a ticket, as they may get more bang for their buck come the new year.

If using the app, click here to send us a news tip
Report a correction or typo
Related topics:
shoppingholiday shoppingshopping7 on your side
Copyright © 2021 WABC-TV. All Rights Reserved.
7 ON YOUR SIDE
Passport backlog has travelers scrambling, frustrated
Tabernacle damaged by out-of-control NYPD SUV gets payment
Should you Buy Now Pay Later with purchases?
7 On Your Side helps customer avoid hot tub hustle
TOP STORIES
Child hospitalized after fall from 10th floor balcony: Police
Man charged in series of attacks inside Inwood park
Long Island nurse fatally stabbed after finishing shift
Black car buyer's experience marred by dealer's 'racist' Facebook post
Imprisoned 'Dating Game Killer' Rodney Alcala, 77, dies in California
WATCH: Woman fends off Doberman to save her little dog
Strangers gift $60K to beloved airport piano player after viral video
Show More
NYU security guard stabs supervisor after verbal dispute: Police
AccuWeather: More humid & spotty t-storms
Amazon hires investigators to probe work culture
Police shoot man after he allegedly swung metal pipe at officers
Should vaccinated people mask up with COVID-19 cases rising?
More TOP STORIES News
Send us your questions, issues, and story ideas to Nina by filling out the form above, by emailing 7OnYourSideNina@abc.com, or contact Nina on her Facebook page or tweet her at Twitter @7OnYourSideNY! You can also call the 7 On Your Side Hotline at 917-260-7697.