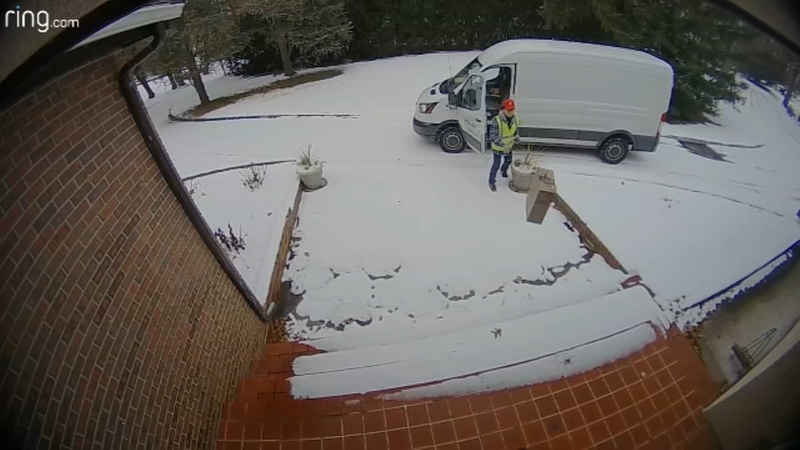 LATTINGTOWN, Long Island (WABC) -- A Lattingtown, Long Island, family said their home surveillance system captured a delivery worker tossing a package, bank shooting it off of their front window and causing it to land on their front porch.

Homeowner, Lance Bondy, said he went outside immediately when he heard the noise.

"I heard what sounded like a bird hitting the window," Bondy said. "So I stepped outside, and I grabbed the package."

The audio on the surveillance video is hard to hear but Bondy said he asked the worker if he had thrown the package and the man responded, "'I'm a professional,'" then drove away.

With shipping companies expected to deliver more than two billion packages this holiday season, Bondy is far from alone.

"The principle of the matter, it was astounding," Bondy said.

Amazon determined the delivery man who threw Bondy's package worked for one of several third-party vendors hired to help off-set the load during the holiday season.
A spokesperson said Amazon hadn't yet identified which third-party vendor was responsible, but promised to hold that vendor accountable for violating Amazon policy.

"We have very high standards for our delivery providers and expect every package to be delivered with care," the spokesperson said.

The spokesperson also said Amazon would reach back out to Bondy to offer a refund as an apology for the poor customer care, and they did on Thursday afternoon.

After Eyewitness News got involved, an Amazon representative emailed Bondy writing, "I'm very sorry for the manner in which your package was delivered. This is not what we expect from our driver..."

While Bondy said he wished Amazon had responded in this manner before Eyewitness News got involved, he indicated he was very appreciative or their final response and the resolution they proposed.

Luckily for Bondy, the package wasn't fragile, but it doesn't make the treatment of his property sting any less.