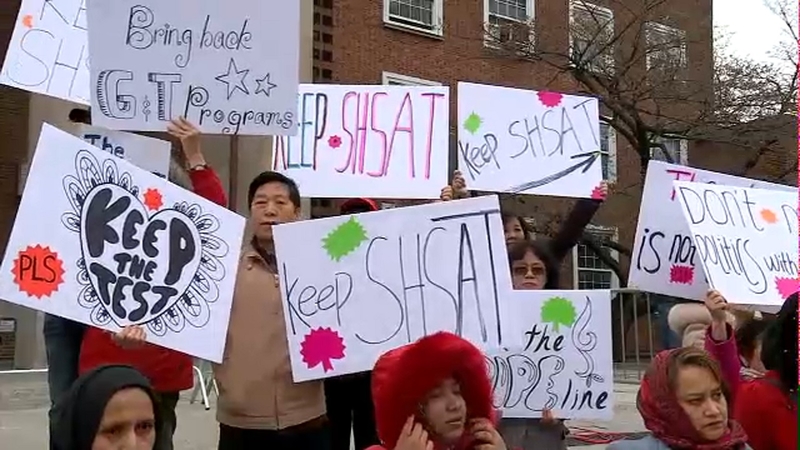 "Nobody disputes that diversity is a goal to be pursued, but we don't believe diversity should be used as a tool or a wedge to divide communities," says Charles Yoon of the Korean American Assoc. of Greater New York.

Parents rallying at Queens Borough Hall outside of a community forum say while they agree with the mayor's motive, they disagree with his method.

"I don't think the real debate is whether or not there should be an exam. I think the debate is that all kids should be prepared equally to do well on that exam," Thompson said.

Ava Rem, who was admitted to Stuyvesant High School says it is the fairest way for students to get into the schools.

"It's not based on race, wealth, or any other connections," Rem said.

The community forum, fit about a hundred people and was packed to capacity, leaving hundreds more stuck outside. The line wrapped around the block.

The mayor in recent weeks has acknowledged he understands parents' frustration.
"I wish I had done it better, and I want to have a dialogue with Asian community leaders," said de Blasio.

"The problem is that City Hall and the Department of Education intentionally excluded an entire community," says State Senator John Liu.

Liu says the mayor's proposal is a non-starter.