EXCLUSIVE: Investigation into sidewalk sheds up for more than a decade in NYC 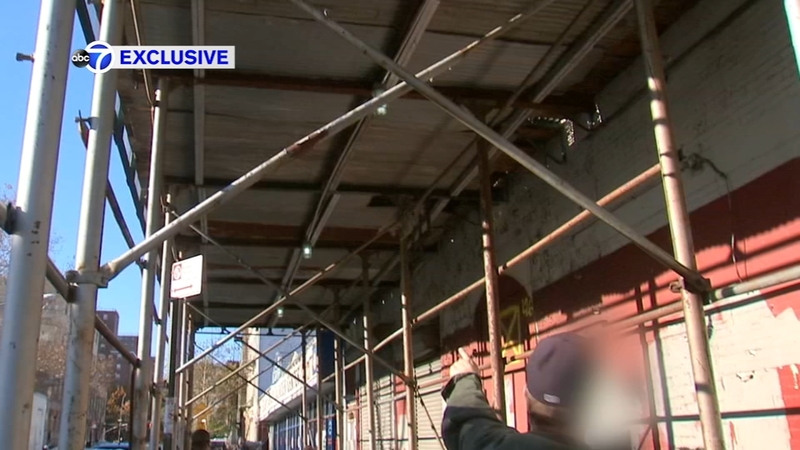 EXCLUSIVE: Sidewalk sheds up for more than a decade plague NYC

NEW YORK (WABC) -- By sheer numbers, city officials have to admit there's a problem here. New York City is the only place in the world where these green eyesores cover 300 miles of sidewalks. These "temporary" sheds meant to protect during repair work, some of them have been up for 10 years.

"Another potential fall hazard and you just taken away the integrity of the foundation structure," a scaffold builder said.

Eyewitness News visited four different sidewalk sheds in Manhattan with a construction worker who has 20 years' experience building them.

He asked that we not identify him for fear he'd be black-listed for pointing out the dangers of these sheds that have been up for eight-to-10 years.

With each passing year this sidewalk shed is here?

"There's more danger. You are only increasing the risk of something bad happening," he said.

A shed on Lexington Avenue has hung over the sidewalk since 2009. Eyewitness News found loose screws and broken steel bracing.

"Really bad, absolutely it weakens structure and right in the middle," he said.

Our investigation has found this site has a mountain of violations related to the sidewalk shed and facade. $79,000 in fines which city documents show were never paid. This lack of enforcement means there's little incentive to fix buildings so the sheds can come down. City Councilman Ben Kallos is pushing for a law that would require repairs to be made quickly.

"You keep doing it non-stop and you get it done within three-to-six months or the city steps in does the work for you and make the bad landlord pay," Kallos said.

One shed on 3rd Avenue in Harlem has been up for a decade:

"I've counted three cases where bar on scaffolding is out?" Hoffer said.

"It's a fall hazard number one and taking away from the integrity of structure," the scaffold builder said.

A structure older than most of these kids walking under it who are vulnerable to injury from the many exposed bolts which should be capped.

"The potential for getting hit in the head, damaging their skulls ripping them open," he said. "They're all over the place right where you saw children."

"You would think, they put the Freedom Tower up in a couple of years," the builder said.

"Apparently not," he said.

Eyewitness News reached out to the building owners at the sites we've investigative and are awaiting a response.

Meantime, the Buildings Department says sidewalk sheds are designed to be robust and is why they rarely ever collapse.

A spokesman says they will send an inspector to look at the sheds in our report and make any necessary repairs.