The Pa. Health Department said there were 15 questionable vials: five were labeled "smallpox" and 10 were labeled "vaccinia."
WABC 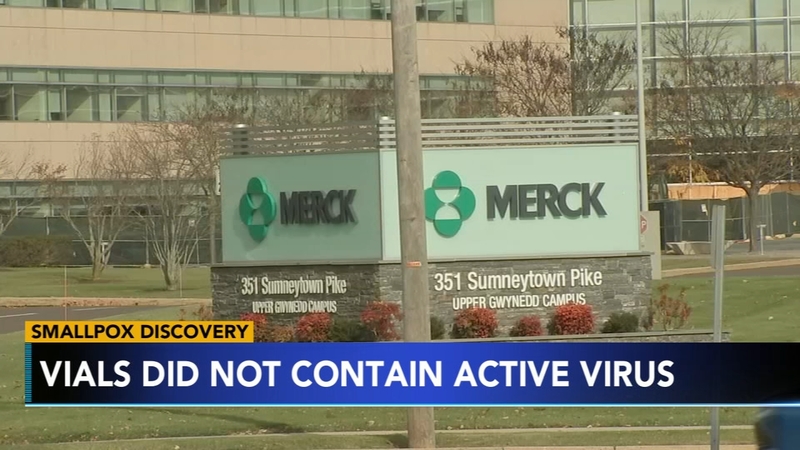 Lab tests reveal no trace of smallpox inside questionable vials

PHILADELPHIA (WABC) -- The US Centers for Disease Control and Prevention says several questionable vials found at a Merck facility in Montgomery County, Pennsylvania, did not contain variola virus, the cause of smallpox.

The vials were found earlier this week when a lab worker cleaned out a freezer at the Merck facility located in North Wales.

The Pennsylvania Health Department said there were 15 questionable vials: five were labeled "smallpox" and 10 were labeled "vaccinia."

"The freezer facility was immediately secured and staff followed standard protocols for notifying CDC of such a potential discovery," federal officials said. "The vials were sent securely to CDC for testing on November 18 to determine what they contained. No one was exposed to contents of the vials."
EMBED More News Videos

"The frozen vials labeled 'Smallpox' were incidentally discovered by a laboratory worker while cleaning out a freezer in a facility that conducts vaccine research in Pennsylvania," said the CDC.

Smallpox, also known as variola, was declared eradicated in 1980 by the World Health Organization after a concerted global vaccination effort.

Before that, the virus, which passes easily from person to person, infected 15 million people a year and killed about 30% of them.

Currently, there are only two places in the world where the virus is stored: at the CDC in Atlanta and in Russia at their version of the CDC.

In 2014, employees of the National Institutes of Health found six vials of smallpox in an unused storage room as they packed up a lab at the NIH's Bethesda, Maryland, campus to move it. Two of the vials contained viable virus. The CDC said at the time there was no evidence anyone had been exposed to the contents of any of the vials.

Governments have argued about whether to keep samples of the virus or to destroy all known copies. Most routine vaccination stopped in 1972 but military personnel and some researchers are still vaccinated.