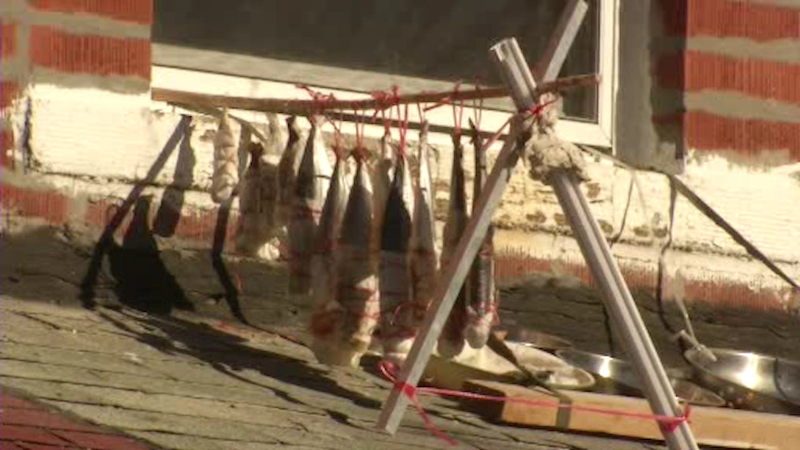 BENSONHURST, Brooklyn (WABC) -- Some residents in Bensonhurst, Brooklyn are raising a stink after one of their neighbors has taken up drying fish out on their roof porch.

"Do you know what kind of fish that is?" Eyewitness News asked.

The residents on 64th Street have no idea what kind of fish it is, but they really don't care.

They just don't want to see it or smell it when they walk out of their front door.

"What gives these people the right to hang fish out there and not care about their neighbors? No respect around here," Grosso said.

"If you look, there's more food out there. They use the top of the porch as like a refrigerator. During the summer there are all types of food out there. There's even a piece of wood up there to block the food from falling off the porch," said Cindy Christo, a Bensonhurst resident.

It may be hard to tell from the street, but each fish appears to be wrapped in plastic and bound with a rubber band, though apparently not enough to keep the bugs away.

"They were shaking it and hitting it with a fly swatter to get the bugs off of it. That was actually yesterday," Christo said.

In the cooler temperatures, especially with a breeze, you don't smell it as much.

But in the summer, neighbors say it's a different story.

"I never saw them out a lot, but it just really smells," said Melanie Handovic, a Bensonhurst resident.

"I called the city, and they didn't know what to label it under," Christo said.

The Health Department would only step in if it started to attract vermin. But by then, neighbors fear it will be too late.

"It's not pretty really, it's disgusting, outside it's no good," Handovic said.