Protesters in Smithtown met by large group of counter protesters 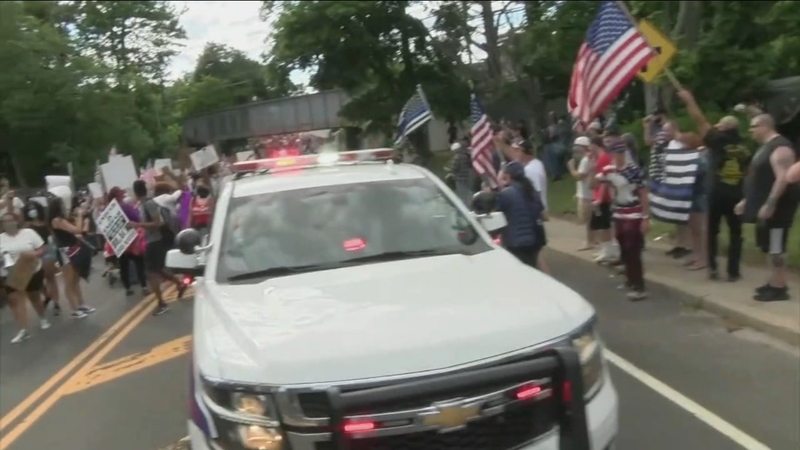 Protesters in Smithtown met by large group of counter protesters

SMITHTOWN, Long Island (WABC) -- Protesters in Smithtown were met by a large group of counter protesters Sunday, as police tried to quell the tension and prevent violence.

The counter protesters gathered along West Main Street and chanted things like "USA!" and "All Lives Matter," and many said they were there to stand up for the lives of police officers.

Insults flew from both sides of the protest, as police stood between the two sides. Video secured by Eyewitness News shows particularly heated moments as protesters and counter protesters tried to break through the police line to get at people on the other side.

One protester reported to police that when he separated from the larger group, a man punched him in the head.

Eyewitness News obtained Instagram video which shows the protester with blood coming from the side of his head and running down his neck. Police said they are investigating the incident, and the video is part of their investigation.

Caitlin Matos-Rodriguez, 20, of Central Islip, organized the protest. She said she thought Smithtown would be a good place to have a Black Lives Matter protest because the town is a predominately white town where people may not understand the challenges minorities face.

"I figured that would be like a great town to start this protest and get our voices heard," Matos-Rodriguez told Eyewitness News reporter Kristin Thorne.

Last week, Matos-Rodriguez put out a flyer promoting the protest, which showed a fiery image from Minneapolis with the words, "Rebel. March. Mosh." The flyer upset many business owners and even some residents in Smithtown.

Matos-Rodriguez later removed it and issued a statement on social media ahead of the protest saying, "This protest has one goal - to PEACEFULLY give voice to those who feel they have not been heard. I recognize that the language and imagery used in the flyer was inflammatory and caused concern. This resulted in misunderstandings about the intent of Sunday's protest."
Matos-Rodriguez said she was surprised that counter protesters showed up to the protest.

"The point of Black Lives Matter is to show that all lives don't matter until black lives matter," she said.

Town of Smithtown Supervisor Ed Wehrheim said he believes the counter protesters were not from Smithtown.

He applauded the town's public safety officers and Suffolk police officers for allowing the protesters to protest. He said the town and police department began planning for the protest six days prior.

"It's a constitutional right for people to protest as long as its peaceful, he said. "I think people should know that you have to allow them to say their piece. We don't have a problem with that in Smithtown at all, as long as it's peaceful."

Matos-Rodriquez said she is considering planning another protest, but said it most likely will not be in Smithtown.