WABC
NEW YORK (WABC) -- A storm bringing a wintry mix of precipitation is moving through the New York area Monday, and a winter storm warning will be in effect into this evening.

The snow that began falling late Sunday night changed over to sleet, back to snow, and later will make the roads very icy in New York City.

In the northern suburbs, roads were slick after the snow changed over to freezing rain. 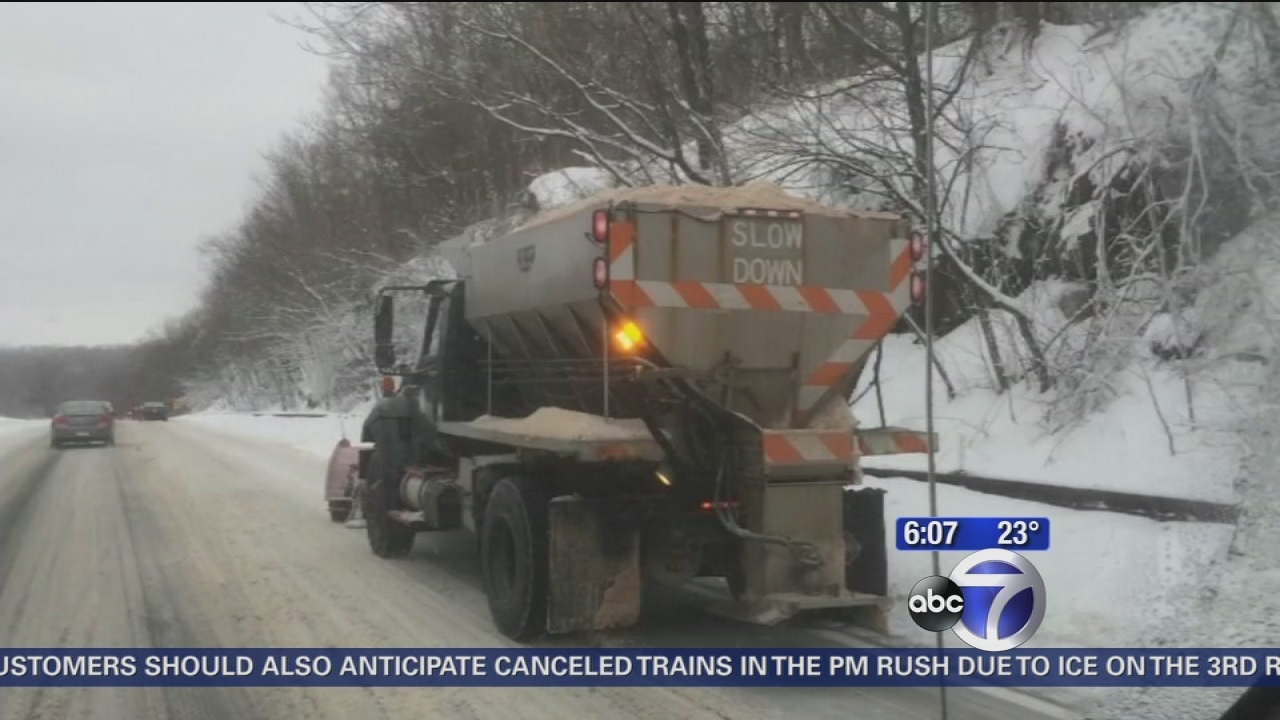 Heaviest snow far north and west of the city
Jeff Smith has more on the conditions from New City.

The combination of snow, sleet and freezing rain hit New Jersey overnight and into the afternoon hours. Northern New Jersey is under a winter storm warning with the possibility of more than a half-foot of snow, while accumulations will total less further south.

Authorities warn that roads will likely be slick at times, and New Jersey Transit is cross-honor tickets system wide. The Hudson Bergen Light Rail is suspended due to overhead wire problems, and buses are being provided. 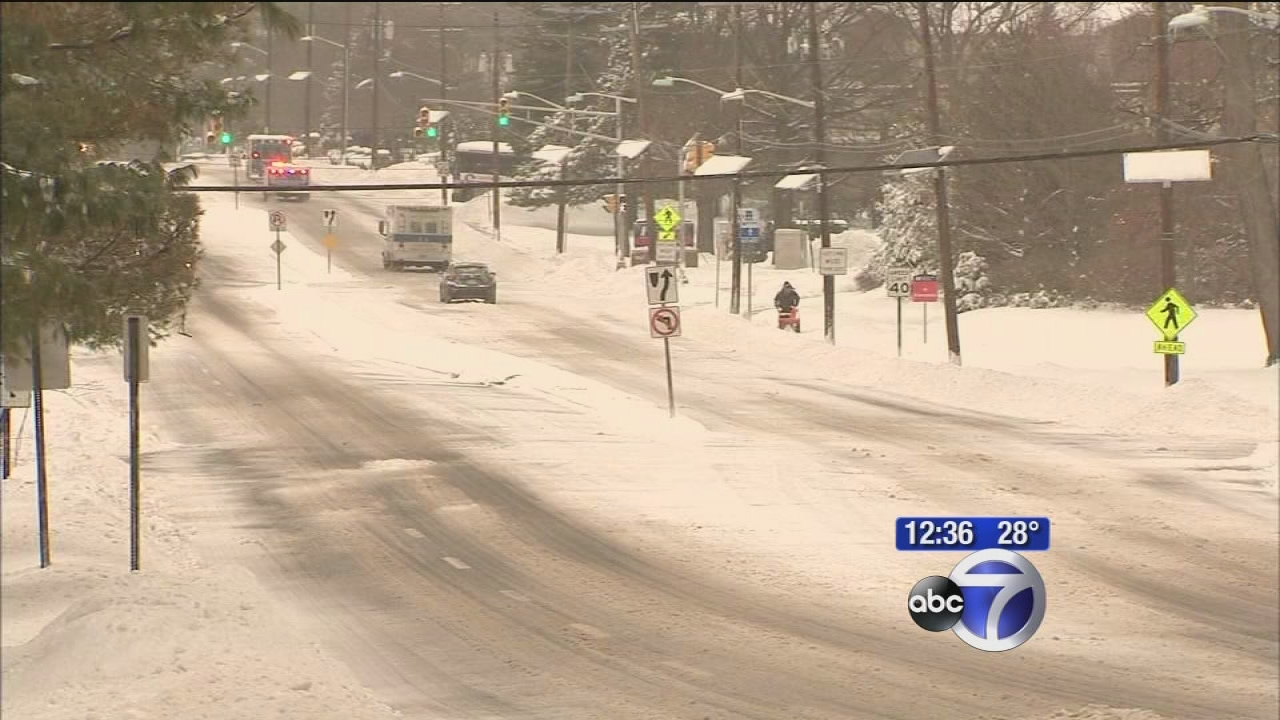 New Jersey roads slick, rails affected after snowstorm
Michelle Charlesworth has the latest from Westwood, where snow has been piling up Monday morning.
On Long Island, crews were out early Monday morning trying to keep the roads clear. Some schools opened with a two-hour delay, while others closed for the day. In total, the storm dumped between three and five inches of snow north of the Long Island Expressway and slightly less south of the LIE. 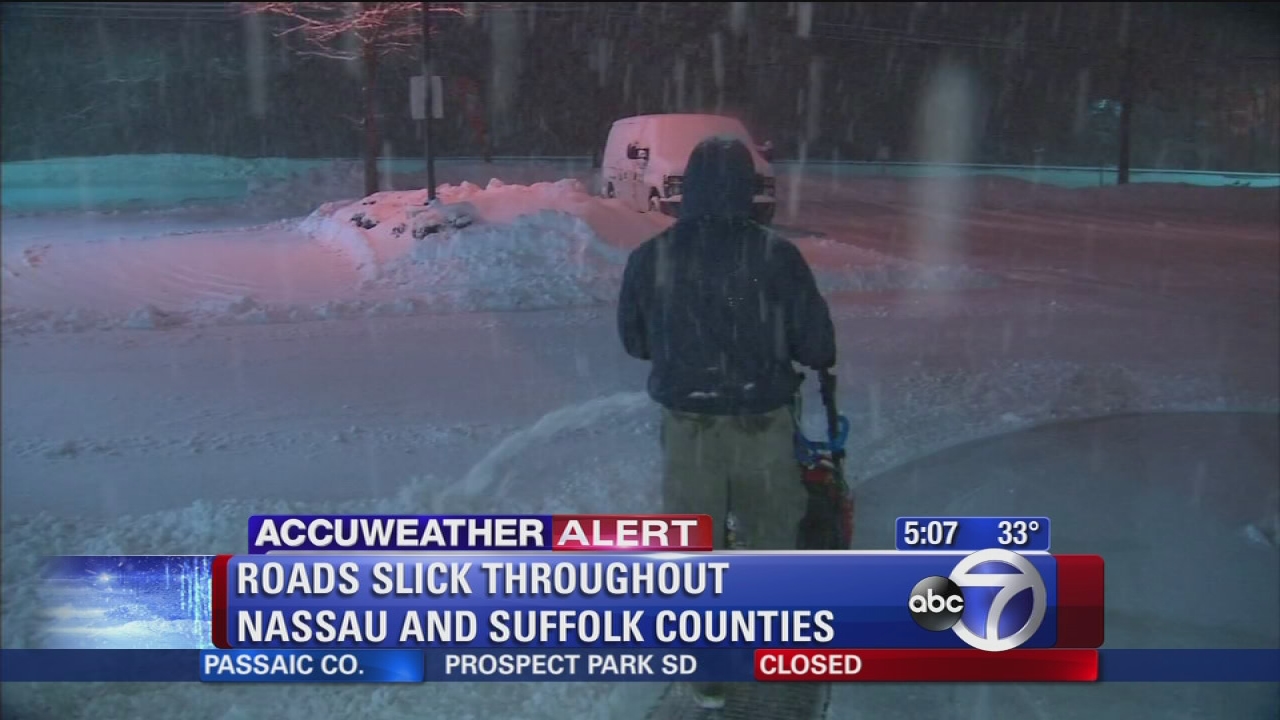 The MTA says it has snow and ice-fighting equipment across its network and extra crews are keeping platforms clear of snow and ice.

It also has a fleet of snow-clearing equipment on its bridges and tunnels and 9,800 tons of de-icing material.

The agency says some service may be impacted if subway trains have to be stored on express tracks after the evening rush hour Monday.

It advises riders to give themselves extra time for the evening commute.

Sanitation workers have been assigned to two 12-hour shifts for over a week, with 2400 workers per shift.

The Department of Transportation deployed anti-icing units to each of the East River bridges and pre-treated pedestrian overpasses and step streets.

Nearly 600 flights were cancelled at the three New York area airports, as crews cleared the runways of snow and ice.