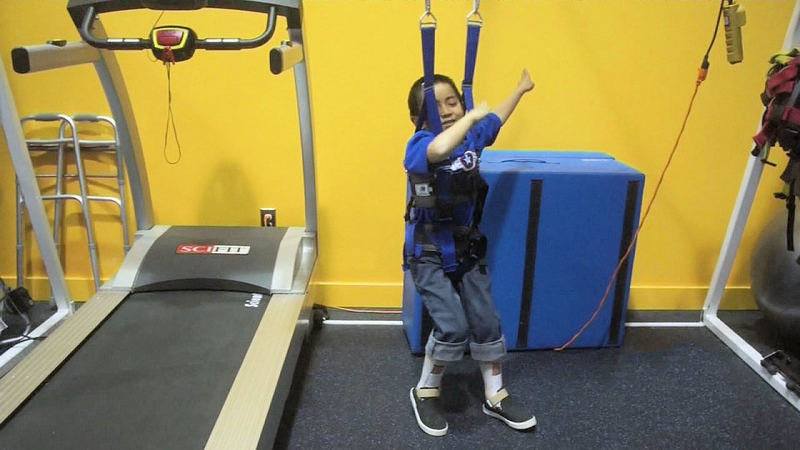 FRESNO, Calif. -- A Fresno boy is learning how to dance again after an accident that happened six months ago.

On the living room floor of a southeast Fresno home, you can usually find Bruce Mansy practicing the 'Nae Nae.'

"I don't really know how to explain it," Bruce said. "Well, I kind of feel happiness."

For Bruce, dancing is a freedom he never thought he'd have again. The 7-year-old boy is wheelchair-bound and paralyzed from the waist down.

After being injured in a car accident, 7-year-old Bruce is able to dance with the help of this harness.

It happened six months ago when Samuel Mansy was driving his kids home.

"All I remember was saying 'no' and trying to step on the brake but it was too late," he said.

Mansy was coming up to the Temperance and Jensen intersection when he says a driver didn't stop and drove into his path.

"The first thing on my mind was to get the kids out of the car but, at the same time, I was scared," he explained. "I was scared at what I was going to see."

Bruce's spine was broken, and doctors said he would never walk again. For the Mansy family, some days are harder than others. But thanks to therapy organization Project Walk, Bruce's love of dance is making a comeback.
"I felt like doing it over and over and over again," Bruce said.

Strapped to a harness, he can 'Whip,' 'Nae Nae' and 'Dab' all day long. And his progress is showing. His mom Lyhoy says since he's started at Project Walk, he's been able to wiggle his toes and clench his legs.

"Doctors mentioned we shouldn't see any of that," she said. "So, for him to see those improvements. That's the reason we want to keep going."