Be Kind: Cancer survivor reunites with NYPD officers who guided her through gridlock on way to chemo 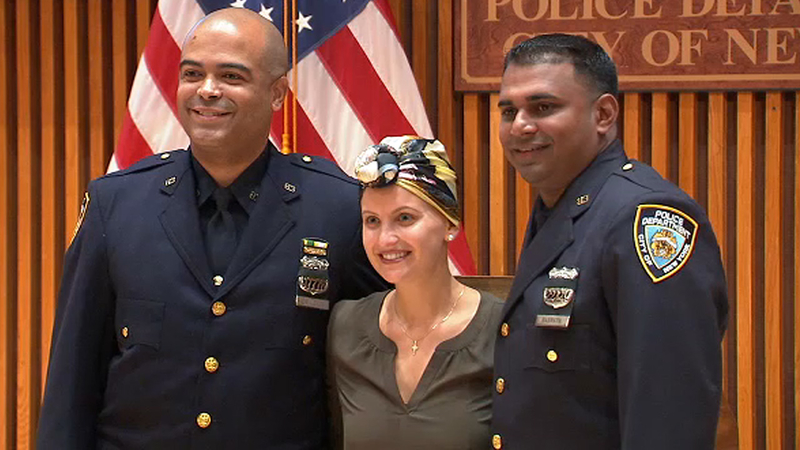 Be Kind: Cancer survivor reunites with NYPD officers who guided her through gridlock on way to chemo

NEW YORK CITY (WABC) -- A cancer patient who got stuck in Manhattan traffic on the way to her chemotherapy appointment reunited with the NYPD officers who guided her through the gridlock.

Gabriela DeMassi was on her way to Memorial Sloan Kettering Cancer Center around 9 a.m. last Thursday when she got stuck on Sixth Avenue near West 57th Street in Midtown.

"We were all kind of anxious driving into the city," she said. "We didn't know the (United Nations General Assembly) was happening."

UN delegations had taken over the city, prompting our own Heather O'Rourke to advise motorists to stay off the roads.

"If you are planning on coming into the city today, you're going to want to take mass transit," she warned.

But DeMassi didn't and got stuck. Her dad was driving, and she decided it would be faster to walk. She started on foot and then spotted a group of NYPD officers, and she asked for help.

"'Do you know any great way to tell my dad to get to MSK? Is there a right turn? We can't make a turn anywhere,'" she recalled saying.

Officers Rajiv Dasrath and Hamlet De Leon were there.

"As soon as she said the hospital, it was a no brainer," De Leon said.

The officers stopped traffic, and suddenly they were moving -- but not finished. Officer De Leon offered words of encouragement.

"'You've got this girl, keep fighting do not give up, do not stop,'" DeMassi said. "He stuck his hand in the window and gave me a high five."

She was so moved that she later posted a thank you, having no idea who the officers were.

DeMassi comes to Sloan Kettering for treatment every two weeks, and it's a full day that includes chemotherapy. Six years ago, she was diagnosed with a rare form of cervical cancer. She's stable now and says this kind act made a tough day a bit more bearable.

"It really broke my heart to see," Dasrath said. "She's a human, and we all are too."

It was a simple gesture, when someone needed it most.

"It's something like this that makes us police officers," De Leon said.