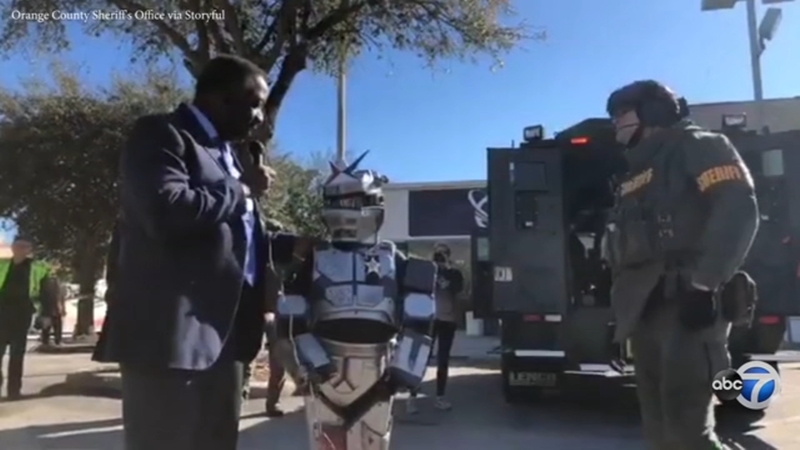 ORLANDO, Fla. -- Deputies in Orlando, Florida, granted an elaborate wish for a 10-year-old boy with a serious heart condition on Thursday, February 27, dressing him as a crime-fighting robot, and staging a bank robbery and fire for him to foil, local media reported.

The Make-A-Wish Foundation of Central and Northern Florida collaborated with the Orange County Sheriff's Office (OCSO) to make the day special for young Gaige Pike of Lakeland, who was dubbed "ROBOGaige."

The sheriff's office said on Twitter that "Gaige said he wanted to be able to save someone, so today we are making his wish come true and we are proud to do it!"

Sheriff John Mina posted a video on Wednesday telling Pike that the city of Orlando needed his help. Pike arrived at the sheriff's office on Thursday morning as "a regular boy," the OCSO said before he became ROBOGaige and was sworn in as a deputy by Sheriff Mina.

During the swearing-in ceremony, a dispatch came through that there had been a break-in at a nearby bank, and security footage from the bank showed a suspect attempting to get into the vault. With SWAT officers, ROBOGaige brought the failed robber out of the bank to cheers and applause from waiting citizens. He received medals from the sheriff's office and from Orange County Mayor Jerry Demings.

Later in the day, ROBOGaige helped Orange County Fire and Rescue put out a burning building, then save a citizen before the structure collapsed, the OCSO said.