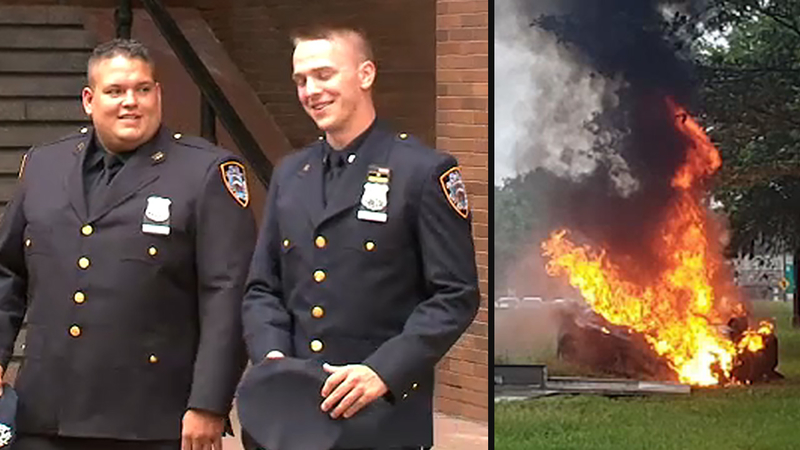 LOWER MANHATTAN, New York City (WABC) -- There was an emotional reunion this week between an NYPD officer and the man he pulled from a burning vehicle on a Long Island highway, a blue bond made even stronger because the stranger he saved turned out to be another officer.

You could call officers Ryan Murphy and James Czerw fast friends, proof that even in a city with 36,000 cops, it's all about being in the right place at the right time.

"We were laughing about it before, like small world, you know?" Czerw said.

They found each other just before 1:30 p.m. on Labor Day, along the Northern State Parkway, at a time when the weather on Long Island was pretty ominous -- windy and rainy.

"I remember I hit this puddle," Murphy said. "And then I let go of the wheel, and I braced my head."

Murphy, a 23-year-old rookie officer with just two months on the job at the 43rd Precinct in the Bronx, lost control of his car as he headed home. And it was sheer luck that Czerw wasn't far behind, having finished his own long day with the anti-crime unit at the 102 Precinct in Queens.

"And I just saw him pop off the road, hit the sign, spin out," Czerw said.

Czerw took one look at what was happening and knew the driver needed help fast.

"We have a job to do whether we're clocked in or clocked out," he said.

That's when Czerw pulled Murphy from the burning vehicle and learned he too was a police officer.

And Czerw stayed by his brother in blue's side.

"He was in the ambulance with me, he was in the hospital with me, so I knew I was in good care the whole way," Murphy said.

Murphy is already back on the job, and he even plans to voluntarily deploy to Afghanistan with the Army National Guard in January.

The two reunited for the first time since the crash at NYPD headquarters, and now, the rookie has a new mentor.

"That's the cop I'd rather be," Murphy said.

And for Czerw, the brotherhood is more than just a job.

"You always seem to find another cop in this world," he said.

It's a refreshing reminder that someone you never even met before can feel like family..