By Brett Cohen & Rolando Pujol
NEW YORK CITY -- The over 52,000 runners from around the world who will be pounding the Gotham pavement on Sunday in the TCS New York City Marathon are part of this epic event thanks to their talent, training and determination, but none would be here were it not for the vision of one man: Fred Lebow.

Lebow founded the marathon in 1970 -- back when it was just 55 finishers who ran laps around Central Park. But it grew quickly -- Lebow's idea was unstoppable.

He died 25 years ago this month, succumbing to the brain cancer he fought for four years. He even completed the 1992 marathon during a remission in his illness, legendary runner Grete Waitz at his side all the way, a moment that inspired people far outside the world of running.

Fred was honored with a statue in Central Park in 1994, which usually sits on 90th Street and East Drive. But days before the marathon, the statue is always moved to a spot near the finish line, not far from where the man himself would stand on marathon days during his years at the helm of the organization. There he is, still wearing his cap and running gear like no time has passed at all, glancing at his watch as the runners finish their 26.2-mile journey.

Lebow's friend, George Hirsch, who ran races with him in places like Marrakesh, Rome and Tokyo, speaks with joy about the man.

"Running was his life," Hirsch declared, describing Lebow as a visionary.These days, Hirsch is the chairman of the NYRR Board of Directors.

Back when he met Lebow, Hirsch was a magazine publisher who became an early sponsor of the marathon, when it was run by a "little group" called the New York Road Runners Club, Fred Lebow in charge.

The NYRR isn't so little anymore, but the pioneering spirit of Lebow is still infused in the organization. It's a spirit that powers those tens of thousands of runners, and while all may not know who Lebow was, those that do and happen to find themselves near that statue know to touch it for good luck, and maybe leave flowers by his running shoes.

Lebow, explains his friend Hirsch, would have been thrilled by the statue -- his presence still at the finish line in Central Park, a quarter century after he left us.

"Fred symbolized the spirit of running but also the spirit of New York. Fred was an immigrant. He was a Holocaust survivor . He learned to live by his wit ... (a) classic New York American story. He'd be thrilled knowing this statue was here in the park," Hirsch said.
Report a correction or typo
Related topics:
societycentral parknew york citymanhattanstatuenew york city marathonrunningtcsmarathonsoriginals
NEW YORK CITY MARATHON Bear crawling to the finish of the NYC Marathon 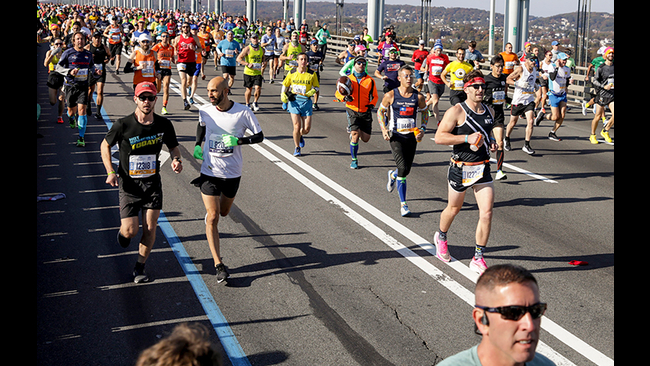