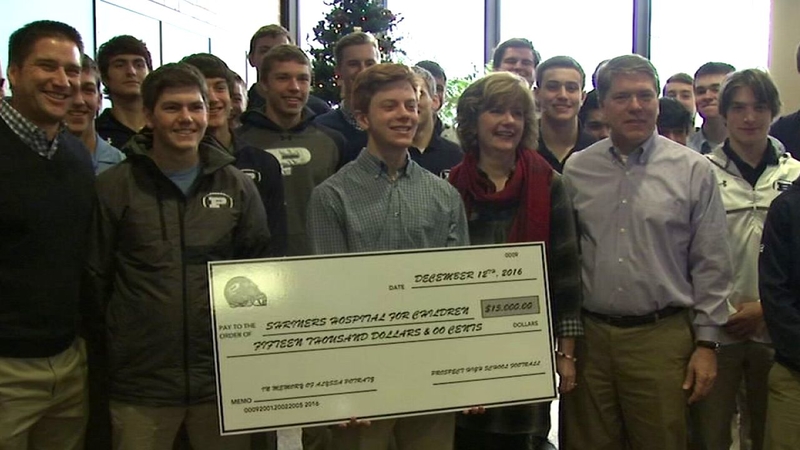 MOUNT PROSPECT, Illinois -- A big donation was given to Shriners Hospital for Children Monday from a northwest suburban high school football team honoring the memory of a teammate's twin who died nearly a decade ago.

The Prospect High School football team in Illinois delivered a $15,000 check to Shriners Hospital in memory of Alyssa Potratz, a nine-year-old girl who died suddenly in 2008 of a rare immune system disorder. She would have been a senior graduating with this class alongside her twin brother, Jeremy.

The team has been raising money for Shriners for eight years in Alyssa's name.

"They play football for four years, they play life for 60, 70, 80 so we're preparing them for something much larger than just wins and losses," said Mike Sebestyn, the coach of Prospect High School's football team.

The family lives across the street from Prospect High School and Jeremy and Alyssa grew up fans of the team, so the team vowed to raise $100,000 for the hospital by the time Jeremy was a senior. He now plays wide receiver on the team.

"We had a rough time of it, but something good really came out of this," said Dan Potratz, Jeremy's father.

The check they delivered Monday put them over the top of their goal.

"It's very difficult to put into words, it makes me very emotional," Jeremy said.