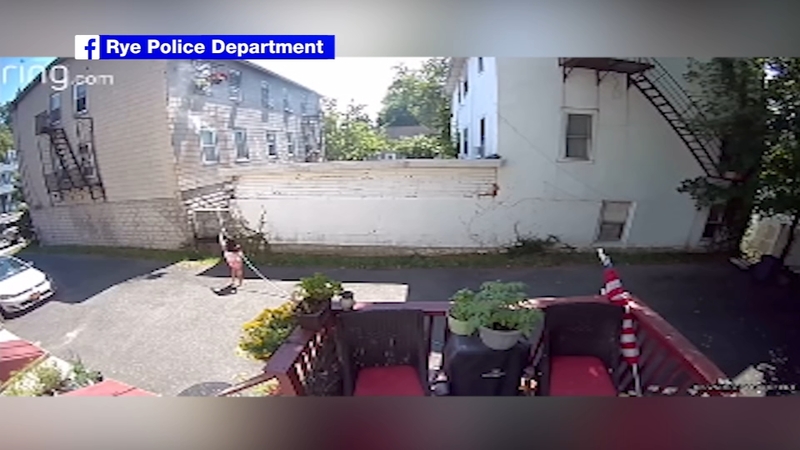 RYE, Westchester County (WABC) -- A little girl from Rye is being hailed as a hero for jumping into action with her sister when their apartment building caught fire.

The flames broke out Thursday at a multiple story dwelling, according to Rye police, and Ali and Katherine Gonzalez decided to team up to help.

Ring camera video from a neighbor's home captured 10-year-old Ali running to grab a hose and spraying water into a window that had smoke pouring out of it.
EMBED More News Videos

"So I kept trying, and I kept switching (the hose head) so it would go stronger, but it still wouldn't go out," she said. "You could kind of see that (the smoke) was coming from the inside, so then we thought that it was all on fire."

It was 18-year-old Katherine who told her to run from their building and grab the hose, while she dumped water from a window above. Her next move was calling 911 and alerting neighbors.

"My neighbors have small children, so I was thinking about that too," she said. "And that's when I called, and I knocked on all their doors. I was like, 'Our neighbor's thing is on fire. I would get out if I were you.'"

Ali worked the hose until real firefighters arrived, and the fire was quickly brought under control. The apartment in question was empty, and there were no injuries.

Ali's actions have drawn kudos from the Rye Fire Department, Rye Police Department, and even the mayor stopped by to congratulate her.

"We do want to recognize the bravery of a young lady by the name of Ali who instinctively ran out of her home and got her neighbor's hose in an attempt to put out the fire," Rye PD posted on Instagram. "We applaud you Ali, great job!"

Her mother says she's proud, but she offered caution in the future.

"I already told her you shouldn't do that if it ever happens again," Carmen Gonzalez said in Spanish. "Just get out and run."

Still, it was job well done by the junior fire brigade. Just ask Mary Fisher -- it was her hose and Ring camera involved in the action.

"They were all working as a team," she said. "It was just amazing."