WABC
By Web produced by Jennifer Matarese
NEW YORK (WABC) -- The biggest fireworks show in the country, the Macy's Fourth of July Fireworks Spectacular, did not disappoint.

Vibrant colors cascaded off the Brooklyn Bridge with a crescendo of explosions and a kaleidoscope of colors.

Organizers said there were some three million spectators along the East River.

Barges carrying some of the 50,000 pounds of explosives were moved south of the Brooklyn Bridge as a precaution because of expected rip currents.

After five years on the West Side, the Macy's fireworks show is back on the East Side.

The theme for this year's 25-minute show was the 200th anniversary of the "Star-Spangled Banner".

It was a truly grand show with a grand finale that garnered lots of amazement.

Macy's says more than 1,600 shells were launched per minute.

One World Trade Center marked the holiday by lighting its 400-foot antenna red, white and blue. 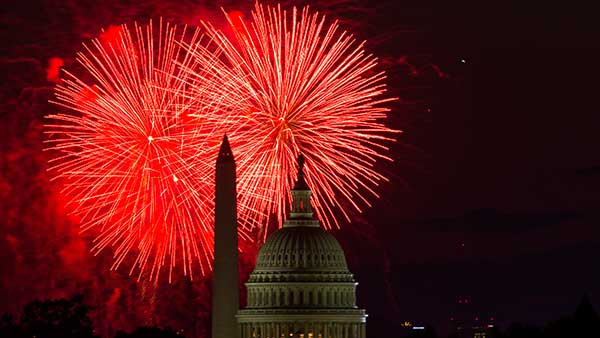