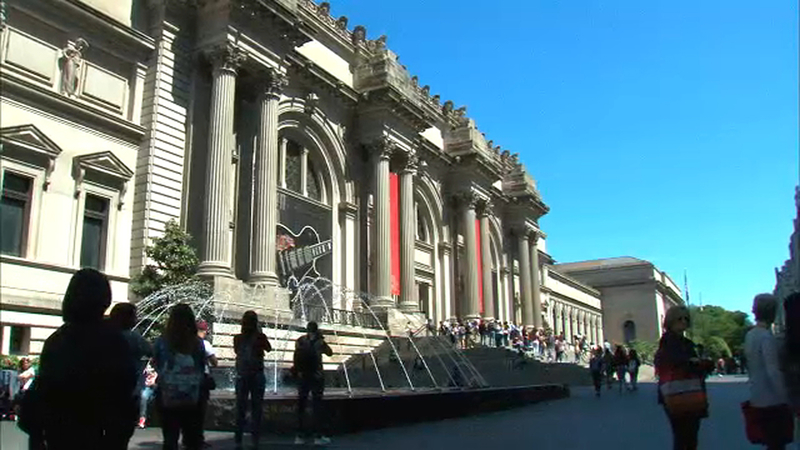 UPPER EAST SIDE, Manhattan (WABC) -- Anticipation is building ahead of the World Pride celebration in New York City at the end of June.

The Metropolitan Museum of Art takes part in highlighting and celebrating Pride Month every year, but this year the museum has something special planned.

Not far from the treasures in the museum's grand hall on Wednesday was a fiery performance by The House of Gorgeous Twisters.

It's all part of the kickoff of a series of events, performances, discussions and workshops that will happen at the Met in June as New York City gets ready to host World Pride.

"We're about celebrating, not only looking at a performance like that, but that that's a community, it's a community that created safety for people who were ostracized," said the Met's Sandra Jackson-Dumont.

Jack Mizrahi is a global advocate in the gay community and will take part in many of the workshops and discussions.
"Everybody wants diversity," said Mizrahi. "Diversity is going to win because there are so many of us with different backgrounds that bring so much more to the table than what was the norm, and I think that's what it is. I think people want to stray away from what they thought was the norm."

Which is why the team at the museum says it is committed to making it a place where people can have difficult and extremely inspiring conversation.

"This year with pride we are doing a slow drum beat up to helping people understand that the Met is about the reformation of museums as civic spaces," said Jackson-Dumont.

On June 11 at 6:30 p.m., the plaza at the Met will come alive with an epic competition: "Battle of the Legends: Vogueing at The Met".

"We're a memeber of this city and are really committed to being a part of this incredible celebration," said the museums Ann Meisinger. "We're also talking a lot about ways to incorporate queer voices in our programming all year long."

All events and programs are free with Museum admission.