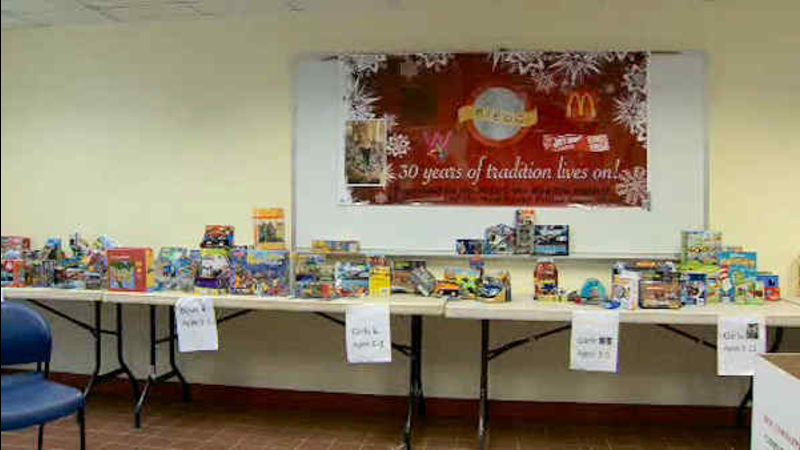 NEW HAVEN (WABC) -- A group of students in Connecticut refused to let Grinches ruin Christmas for thousands of children. In fact, they saved Christmas.

After more than $20,000 worth of donated Christmas presents were stolen from the Dixwell police substation, the students at New Horizons School in New Haven stepped up to teach the real meaning of the season.

"To fill up this room was no easy task for these guys. and it took them a long time to do it," said Jim Travers, vice president of the United Way of Greater New Haven, which helped aided in the effort. "And we are looking to try to do it replicate that in like 24 hours."

Those presents were supposed to go to 3,000 families in need, who were left in the lurch after the theft. And so New Horizons donated bicycles the students had fixed up to look like new.

"One-hundred percent of the students that go there qualify for free breakfast and lunch, so they are really not a student that has a lot themselves," Travers said. "But they recognize that they wanted to give back to other kids."

They originally planned on selling the bikes, but when they heard of the theft, the students wanted to help.

"When I heard about it, I didn't like it," student Nasere Bacote said, "I wouldn't like the way I would feel if I woke up for Christmas and didn't have any presents or anything to wake up to."

"It broke my heart," classmate Juan Santiago added. "I don't like kids feeling down on Christmas. It's a family day, and I would love to make them smile."

Over the next 24 hours, The United Way is hoping to raise $20,000 to buy presents to make sure every child in need in New Haven has a gift to unwrap this Christmas.