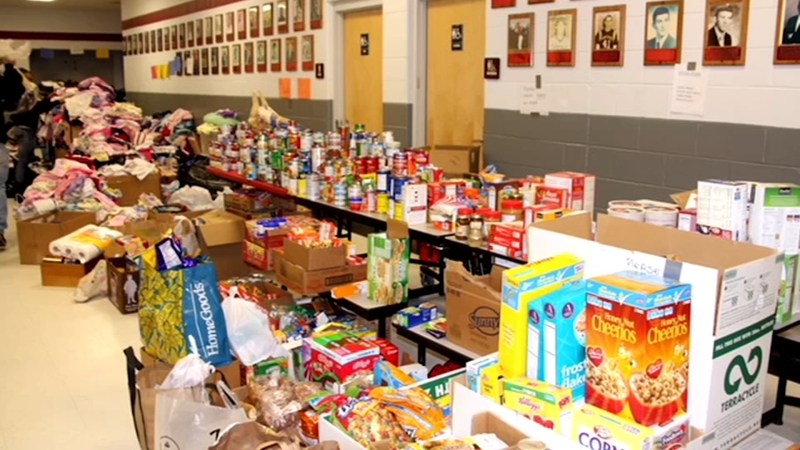 BAYVILLE, New Jersey (WABC) -- In the five years since Superstorm Sandy, one thing many people remember most is the kindness of strangers.

We asked people to nominate heroes they felt went Above and Beyond to help others during the disaster. Holly Nitto, of Bayville, New Jersey, is one of them.

"She took all of the food out of her freezer or refrigerator," mom Debora Nitto said. "And on the stove top, made meals and just boxed them up."

Deborah Nitto nominated her daughter Holly, a special education teacher who used her stove, food, clothes and money and gave to help others, as everything around her crumbled. She had no power for 12 days.

"Actually, she did empty the pantry, and at one point, I remember her going into her closet," Deborah said. "And she goes, 'I have fellow teachers who are struggling.'"

Holly insists she is not the hero, and that she just tried to help those who were.

"Our police department is over there, pretty much trapped on the island," she said. "Out local fire department, same thing. They're displaced. Their families were living in the fire house."

And once school started again, kids needed things like toothbrushes and deodorant. Holly was creative with her kindness, even putting out a basket of necessities in her classroom.

"So toothbrush, toothpaste, deodorant, combs, and I just left it on my desk in a basket," she said. "And I just said, if anybody needs it, you take it. If you don't need it, that's fine."

Holly also gave her students lunch money, and then $5 gift cards during the holidays.

"Some of them didn't even have a home come Christmas," she said.

A hallway in the school was wall-to-wall tables, covered with donations. Holly also organized seminars on how to hire contractors and deal with bank and FEMA money hurdles.

"We had computers set up so people could file FEMA claims," superintendent Tommy Parlapanids said.

The hours Holly volunteered were countless, and the money collected was in the thousands. But she would do it all again, and her mom thinks she serves as an important reminder to all of us.