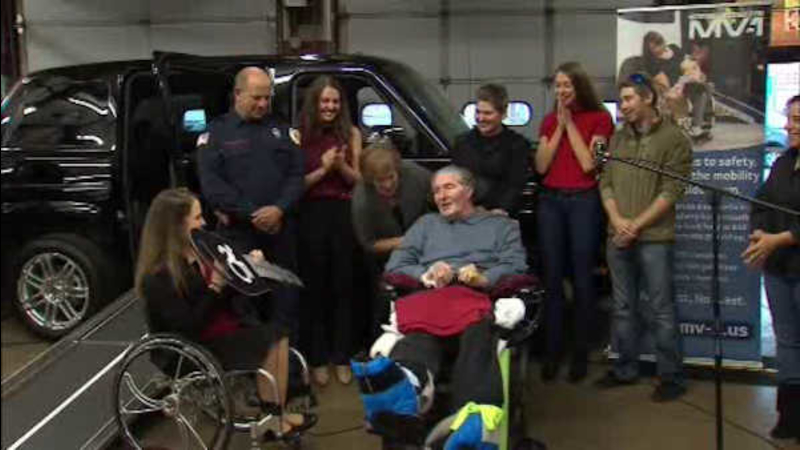 New van for family of waitress who helped firefighters

NORTH BRUNSWICK, New Jersey (WABC) -- A new, fully wheelchair accessible MV-1 was donated to the family of Liz Woodward, who received national attention after she picked up the breakfast tab for two firefighters while working as a waitress in a diner.

"How's it feel?", Liz asked her father Steve. "This is the greatest day," he said.

Steve Woodward knows his family's love beyond measure. It was his waitress daughter Liz, who last year paid for breakfast for two exhausted firefighters on the North Brunswick warehouse fire for 12 hours straight.

They shared her kind gesture with millions on social media.

"We just kept posting it posting it and it went viral and viral," said Burlington County firefighter Paul Hullings.

"He was away in hospitals nursing homes and rehab for 567 days," said Liz.

They took him home in 2013, their house made wheelchair ready. And then:

"And then we found out our house was foreclosed and we lost our home. And we've since moved, but regardless of the challenges my family has faced, we have remained together."

Her paying for the men's breakfast bought love from across the world. The Woodwards needed a van to end Steve's years of being homebound except for medical trips, the only trips insurance paid for.

"So the only two times he's been able to get out into the outside world has been for Katie's high school graduation a few years ago and his father's funeral," said.

The fundraising brought in $80,000. But the company that makes the van, Mobility Ventures, decided to pay it forward too and gave the family the van for free.

"We are pleased to present the Woodward family with this van, Merry Christmas," said Kristina Rhoades of Mobility Ventures.

"This is divine intervention and kindness and prayers," said Steve's wife Beth.

"We are privileged to do what we"re doing," said Bob Schickler of Mobility Ventures.

"I can't thank you all enough," Woodward's daughter Katie said.

"Be the change you want to see, it's one small thing that can set off a chain reaction," said son Zachary Woodward.

It all began with a waitress daughter footing the bill for two tired strangers.

"I think it was never about the money, it was about her intention," Steve Woodward said.