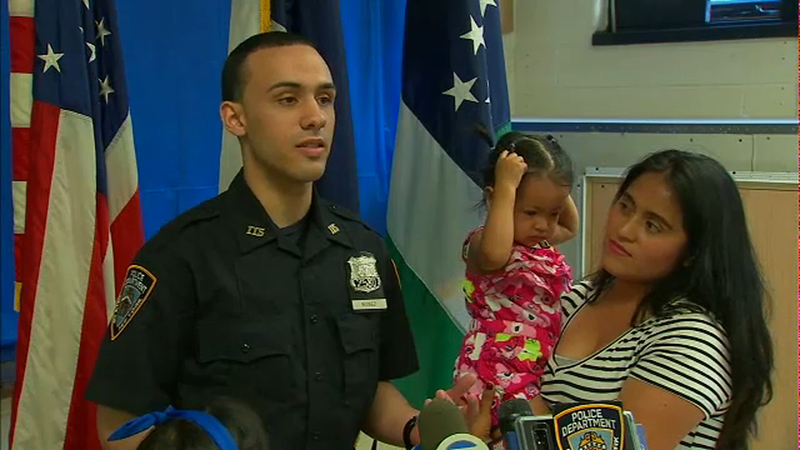 JACKSON HEIGHTS, Queens (WABC) -- A rookie NYPD officer is being hailed as a hero after performing CPR and saving the life of a young child in Queens Monday night.

Panic and helplessness washed over Rebeca Alarcon when she discovered her 20-month-old daughter Leah suddenly having a seizure.

"I just looked at her, she didn't talk, nothing, she was out of breath and I tried to do the CPR and couldn't," Rebeca said.

She says she tried to perform CPR but she was too hysterical, so she frantically ran outside a short distance to the 115th precinct where she saw Officer Osvaldo Nunez posted at the front door.

"I ran out and I saw the Officer Nunez standing outside and I'm like I need CPR right now and he just grabbed my daughter and did the CPR," she said.

"I was careful with her head, laid her down," said Officer Nunez. "I did two cycles of 25 chest compressions, after the first cycle the baby was still not responsive or conscious."

Officer Nunez graduated from the police academy just last month and says his training immediately kicked in. Although there was no response after the first round of chest compressions, he kept calm and continued.

"She opened her eyes and it was like a sigh of relief, she started to move," he said.

"He did an excellent job," said NYPD Officer Robert Worsthorn. "He did exactly what we're trained to do. It's a scary moment and it was a very large relief when the child opened her eyes."

"You see an officer holding a child and he's delicately pressing the chest," said NYPD Deputy Inspector Carlos Ortiz. "The mom is hysterical, she doesn't know what's going on."

EMS arrived a short time later and Leah was taken to Elmhurst Hospital where she was treated and released. During an emotional reunion at the precinct Tuesday Rebeca said she owes her daughter's life to Officer Nunez and her family will be eternally grateful.

"It just happened in a second, I thank him a lot," she said.

"I wanted to become a police officer to assist, help the community, help people," said Officer Nunez. "I'm just really glad that Leah's now with her family. I'll do the same for anyone else in the community."