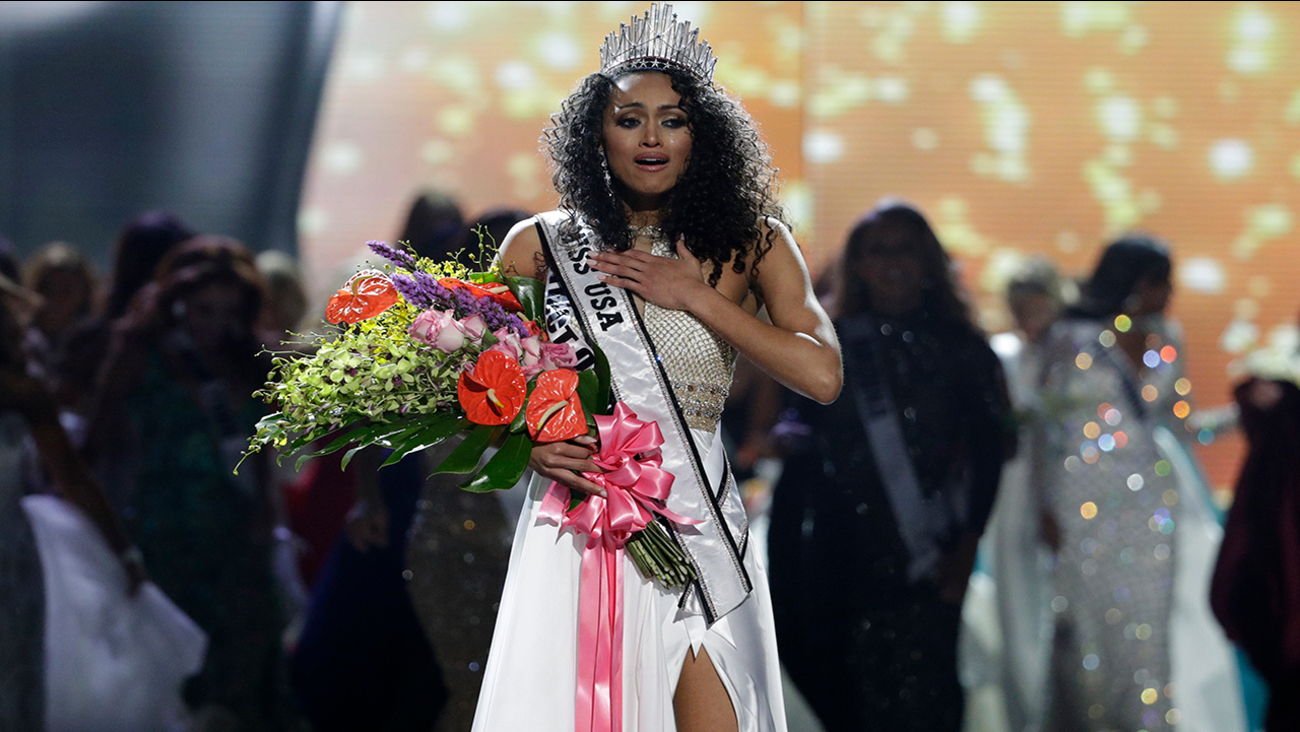 Miss District of Columbia USA Kara McCullough reacts after she was crowned the new Miss USA during the Miss USA contest Sunday, May 14, 2017, in Las Vegas. (AP Photo/John Locher)

McCullough, who represented the District of Columbia in the decades-old pageant, was born in Naples, Italy, and raised in Virginia Beach, Virginia. She said she wants to inspire children to pursue careers in the fields of science, technology, engineering and mathematics.

"I love science," McCullough said after the Sunday event. "I look at this as a great opportunity to ... get to experience worldwide culture, as well as just having the opportunity to be impacted by so many children, hopefully in the math and sciences."

McCullough bested 50 other contestants and will represent the U.S. at the Miss Universe contest.

This was the second year in a row that the representative of the nation's capital won the Miss USA title. Last year, District of Columbia resident Deshauna Barber became the first-ever military member to win Miss USA.

This year's top five finalists were asked questions that touched on the pros and cons of social media, women's rights and issues affecting teenagers. McCullough was asked whether she thinks that affordable health care for all U.S. citizens is a right or a privilege. She said it is a privilege.

"As a government employee, I'm granted health care and I see firsthand that for one to have health care, you need to have jobs."

McCullough said she will be discussing with her supervisor whether she will take a leave of absence from her job at the Nuclear Regulatory Commission during her one-year reign.

Miss New Jersey Chhavi Verg, who studies marketing and Spanish at Rutgers University, was the runner-up at the event held at the Mandalay Bay Convention Center on the Las Vegas Strip.

Verg was one of five women who participated in the pageant who told The Associated Press they immigrated to the U.S. with their families at a young age. Verg and the women representing Florida, North Dakota, Hawaii and Connecticut described the challenges and opportunities they faced as immigrants.

Verg told The AP that she and her parents immigrated from India to the U.S. with only $500 in their pockets when she was 4 years old. Her first winter she did not have a winter coat and the family struggled to adjust.

"I want to show Americans that the definition of what it means to be American is changing," the 20-year-old said. "It's not just one face. There are many different people who are Americans, and I feel like Asian-Americans often times are left out of the conversation."

The contestants' remarks contrast with the controversy that surrounded the pageant in 2015, when then-part owner and now U.S. President Donald Trump offended Hispanics when he made anti-immigrant remarks in announcing his bid for the White House.

Trump co-owned The Miss Universe Organization with NBCUniversal, but the network and the Spanish-language broadcaster Univision quickly cut ties with him, refusing to air the show. Trump sued both networks, eventually settling and selling the pageant to talent management company WME/IMG.
Related topics:
societybeautypageant
Copyright © 2020 by The Associated Press. All Rights Reserved.
More Videos
From CNN Newsource affiliates
TOP STORIES