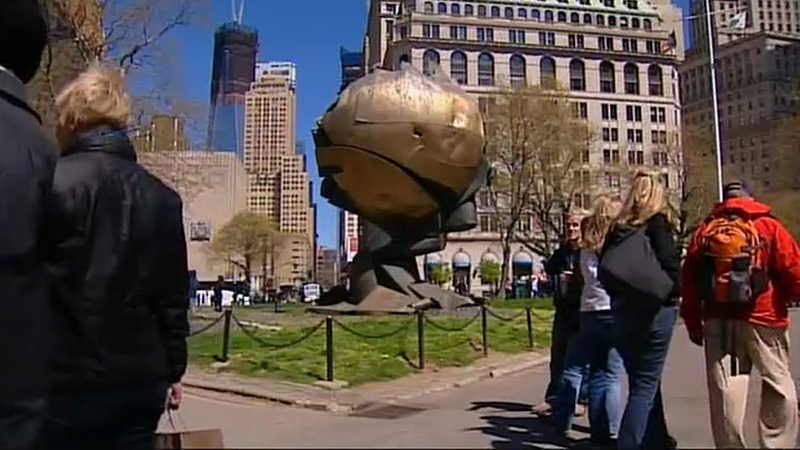 A symbol of hope discovered buried in the rubble of the twin towers has been returned to the site for all to enjoy again.

Michael Burke's 16-year mission is finally complete after his brother, FDNY Captain William Burke, died on 9/11. Now, his relentless quest to return the Koenig Sphere to the World Trade Center site came to its emotional conclusion, as Port Authority officials and 9/11 families dedicated the iconic symbol at its new and permanent home in Liberty Park.

"They're going to make it part of the museum experience," Michael Burke said. "My brother's rig is already in the museum, so it's a very valuable thing for future generations to see."

The sphere stands 25 feet tall and weighs 25 tons. For 30 years, it sat between the twin towers and served as a gathering place for workers, tourists and those looking for a place to stop and reflect.

When the towers came down, the beaten and bruised sphere somehow survived and became a symbol of hope and resilience.

The Sphere was the only piece of artwork at the World Trade Center to survive the terror attacks of 9/11. Workers removed its battered shell from the site, refurbished and then relocated the iconic symbol to Battery Park, its temporary home since 2002.

"The sphere stands now and provides a poignant and poetic complement to the memorial, whose mission of remembrance, education and inspiration is echoed by its dramatic presence," said Alice Greenwald, of the National September 11 Memorial & Museum.

The Sphere, created by German sculptor Fritz Koenig in 1976, was designed as a symbol of world peace through world trade. After the attacks, it became a symbol of hope and resiliency.
Report a correction or typo
Related topics:
societynew york citylower manhattanworld trade centerseptember 11september 11th
Copyright © 2021 WABC-TV. All Rights Reserved.
More Videos
From CNN Newsource affiliates
TOP STORIES