WPVI
By Digital Producer Brock Koller
SEASIDE HEIGHTS, New Jersey -- Theodore Vidal and his boyfriend Colin Beyers were walking the Seaside Heights boardwalk on Friday after having spent the past few hours at Lacey High School. It was on that boardwalk that their story would become a national headline. 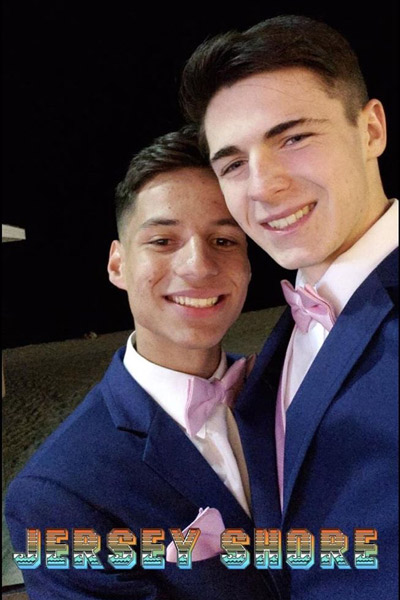 Both are music enthusiasts who met at the Eastern Wind Symphony Youth Band. Vidal, 17, plays the saxophone and clarinet; Beyers, 18, plays the French horn.

It was not until Beyers, who attends Hillsboro High School, reached out to Vidal on Instagram months after their first encounter that they found their connection and began dating. Vidal, who was adopted from Bulgaria, said he faced a lot of negativity about being gay, especially in middle school.

He says he used to be very depressed, with people telling him to harm himself. His close friends and family helped him embrace who he was. Vidal says after meeting Beyers, he no longer has those feelings of depression and desire to hide.

So when prom season grew closer, Vidal knew who he was going with, but he still had to ask the question.

"I asked him with a color guard show," Vidal said. "I made my own music. The show was about flying to Greece, planes in the sky, because we're going to Greece in the summer."

He held a flag that read, 'Will you fly to junior prom with me just like you flew into my heart?'

The two got dressed in their best tuxedos. In fact, one teacher told them their matching shoes made her day.

After a fun night of dancing and singing at the junior prom, Vidal and Beyers decided to hit the boardwalk. 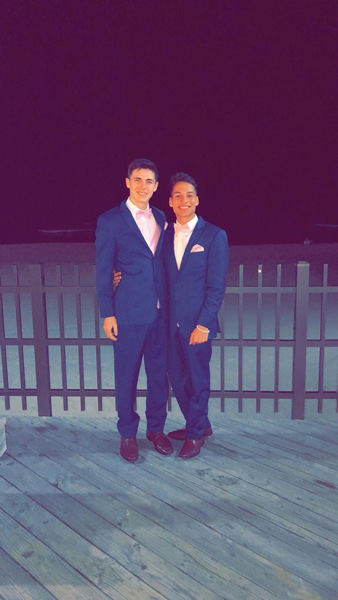 As the two continued their stroll, they came across a group of men hanging out above them on a rooftop bar for a bachelor party.

Good Morning America producer Michael Del Moro, along with his boyfriend and their families, was also on the boardwalk at that time, and he documented what happened.

It’s prom season here, so at that time of night you’ll see high schoolers in their formal attire. As we walked by the rooftop bros, an adorable teenage gay couple passed us in perfectly fitting midnight bue tuxes, matching pink ties, holding hands.

"We noticed a group of rowdy bros gathered on a rooftop bar obnoxiously yelling 'KISS HER!' in unison at every apparent couple that passed by," Del Moro tweeted. "It was quintessential 'Jersey Shore' and, unfortunately, several couples obliged the request to raucous cheers thereby further encouraging the rowdiness. We rolled our eyes."

"I looked at Alec (my boyfriend), my mom, my sister, and stopped to make sure the couple was okay as they walked by...worried that something might happen," Del Moro said.

Vidal said he didn't hear the group yelling at the other couples because it happened before they got to that part of the boardwalk. He said, at first, only one of the men was yelling at them, so they were not sure what was being said. Then more chimed in.

Del Moro reported the bachelor party quickly changed 'Kiss her!' to 'Kiss him!'

"After some hesitation, the young men kissed...and let me tell you, both the rooftop crew and everyone else on the boardwalk just went absolutely wild for them and we all breathed a sigh of relief," Del Moro said.

"Then they started saying 'Kiss him! Kiss him!' So we did and they went wild," Vidal said. "Everyone went crazy."

Del Moro said it was not long ago that young men would shout expletives as he and his boyfriend would walk along that same boardwalk. Along that same sentiment, Vidal said he was nervous about what would happen after they did kiss.

"My stomach and my heart dropped because I was so shocked at the fact at how positive it was," he said. "At first, I thought it was going to be negative. I thought somebody might say something or throw something, but the way it went down, it was amazing. It was so positive and so reinforcing that I could be myself and not be made fun of. I can be myself with who I love and not get made fun of that for that."

Vidal said they didn't care even if things would go bad, they said they were going to kiss no matter what. 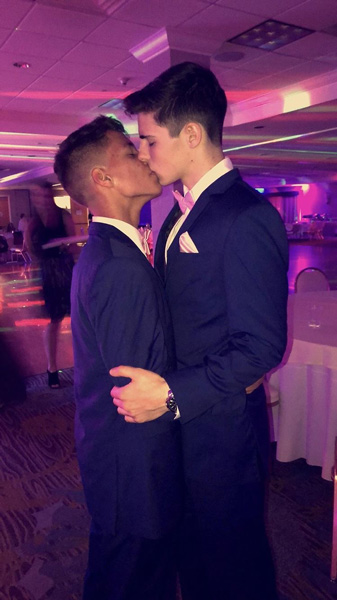 The next day, Del Moro messaged Vidal and Beyers on Instagram to let them know about his Twitter thread.

While he says this was not an 'everything's fine now' Twitter thread, Del Moro called this an encouraging moment for young LGBTQ folks.

This is not a “look everything’s fine now, thread,” and yes... it’s New Jersey, but I just thought it was worth sharing and an encouraging moment for young LGBTQ folks out there.

Vidal is getting evidence of that right in his Instagram DMs.

"A lot of people have been DMing me and Colin," Vidal said. "This morning, I woke up to 200 DM requests on my Instagram. Some reporters, others are just people in general saying how it impacted them and inspired them to be themselves more, not to be scared, and my story has their changed their lives."

Vidal says the comments have been overwhelmingly positive, very different from the "downright rudeness" of others from his middle school years. He said this moment is resonating with so many people because it sends an important to message.

Beyers hopes the story reaches everyone who needs to hear it.

"My hope for this story is that it reaches other LGBTQ members who aren't out or are out and not supported," he said. "I hope that this story gives them hope and inspires them to fearlessly be themselves."

One of the members of the bachelor party contacted Del Moro, saying the "bros" are loving everything that's come from their interaction with the teen couple.

"We are all happy for those guys," the bachelor partygoer told Del Moro.

Another little update: I've heard from one of the "bros" on the roof (turns out I know a few of them... because, of course, it's Jersey). He said they were up there for their friend Wilson's bachelor party and they love this whole thing. "We are all very happy for those guys."

Vidal is preparing for his senior year at Lacey. Beyers is headed for The College of New Jersey next year.

And the two are continuing to plan for that trip to Greece this summer - just now with a few more followers on Instagram.