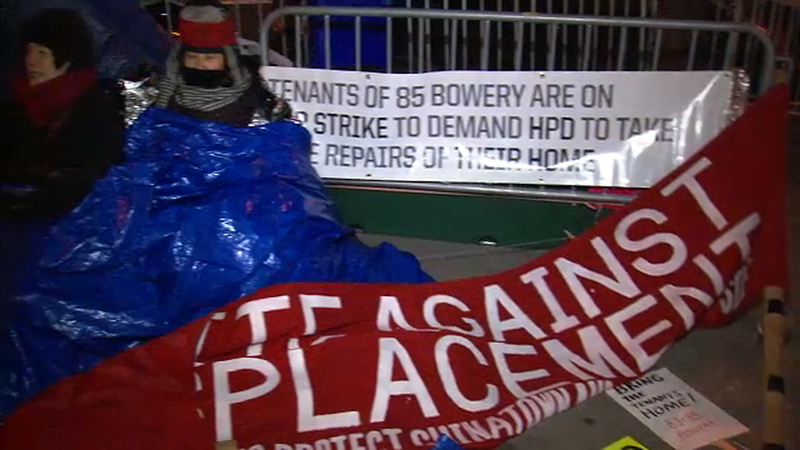 CHINATOWN, Manhattan (WABC) -- After nearly eight months, the displaced tenants of a building on the Lower East Side are finally returning home.

The Department of Buildings lifted the longstanding vacate order on Wednesday, paving the way for dozen of residents who were evicted from their rent-regulated apartments back in January to return to 85 Bowery.

For Qiurong Wang and her elderly parents, it's been a long time since they knew the feeling of home sweet home, since her 89-year-old father smiled like this brightly and her 90-year-old mother got to sit on her own bed.

Speaking in Mandarin, Wang said the hardest part is they didn't know when or if they'd be able to return. They've been living in a hotel, unable to cook.

The building had been deemed unsafe, largely because of structural problems with a stairway and the fire escape. Then, in April, the tenants who were forced out discovered their belongings in a dumpster in front of the building.

Workers for landlord Joseph Betesh had dozens of plastic bags filled with things like money, jewelry, medicine, towels and blankets cleaned out of the apartments, part of what tenants believed was a plan to allow the owner to raise rents.

At the time, buildings department officials said residents were given opportunities to remove their belongings from their apartments, but many did not. Tenants said they were first waiting to find out if they could move back into their homes.

They staged several protests, including hunger strikes, before litigation was settled between Betesh and the residents in July with an agreement that tenants had to be let back in prior to September 1.

"The rehabilitation of 85 Bowery has been completed ahead of schedule and the city's vacate order has now been lifted," a spokesperson for the landlord said in a statement to The Village Voice. "Our team has replaced the staircase that initially caused the vacate order, replaced dozens of rotted floor joists on each floor of the building and rectified all issues regarding the unlawful partitions installed under previous ownership. Additionally, new appliances approved by the residents have been installed in each apartment."

The Coalition to Protect Chinatown and Lower East Side and Youth Against Displacement hosted a welcome back party Friday at the building.