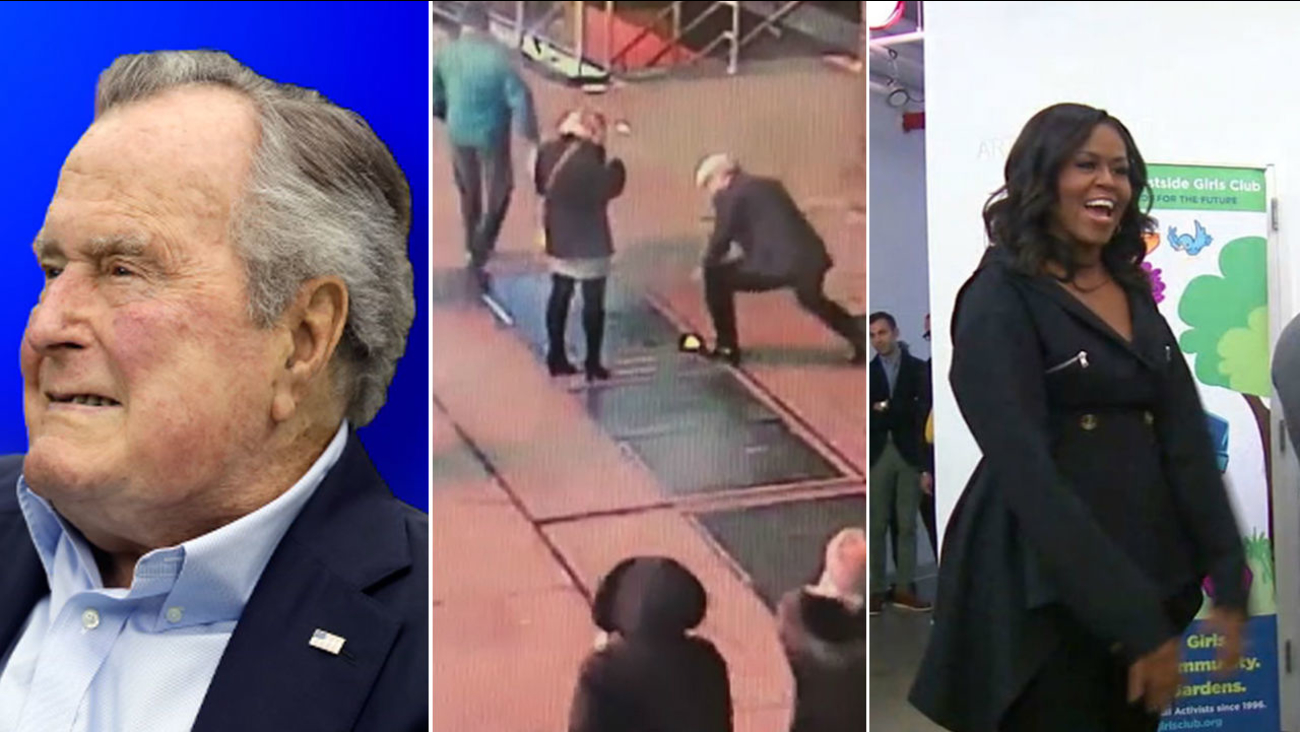 NEW YORK (WABC) -- The world prepares to say goodbye to former President George H.W. Bush after the 41st president passed away at the age of 94. Meanwhile, the NYPD put out a call for help to find a newly engaged couple who dropped their engagement ring down a grate in Times Square. Plus, Michelle Obama gave a group of New York City girls the surprise of a lifetime.

Bush, who served as U.S. president from 1989 to 1993, died on November 30. He is survived by his five children and their spouses, 17 grandchildren, eight great-grandchildren and two siblings. He is preceded in death by his wife of 73 years, Barbara; his second child Pauline Robinson "Robin" Bush; and his brothers Prescott and William "Bucky" Bush.

In a farewell to his son, George H.W. Bush's last words were "I love you, too."

After putting out calls for help on social media to find a couple in a proposal gone wrong in Times Square, the mystery couple has been found.

Officials say on Friday in front of 2 Times Square, the two sought help from the police after the man dropped his engagement ring eight feet into a utility grate while attempting to propose. By the time police recovered the ring, the couple was nowhere to be found.

NJ Burkett has the details from Times Square.

In kicking off her book tour, Michelle Obama held a conversation at the Barclays Center with hundreds of ticketholders who spent big bucks for this coveted event. Fans lined up two hours early for the event - and the rain couldn't even damper their mood.

Earlier in the day, about two dozen teenage girls, shared a much more intimate round-table lunch with the former first lady Saturday afternoon after she surprised them at Lower Eastside Girls Club in Manhattan.

Police are searching for the angry customer who went on a wild rampage inside a Queens spa this week.

Police say the customer threatened an employee with a hammer over a refund and dragged her into the waiting room.

Police are searching for the angry customer who went on a wild rampage inside a Queens spa this week.

One of the most beloved holiday traditions each year is the New York Transit Museum's Holiday Nostalgia Train Rides.
Visitors can board the vintage cars, sit at the wheel of a city bus, step through a time tunnel of turnstiles, and explore changing exhibits that highlight the cultural, social and technological history - and future - of mass transit.

The trains run every Sunday through the end of the year and will actually take you where you need to go.

MTA nostalgia trains rolled through Manhattan on Sunday and will continue running through New Year's Eve.