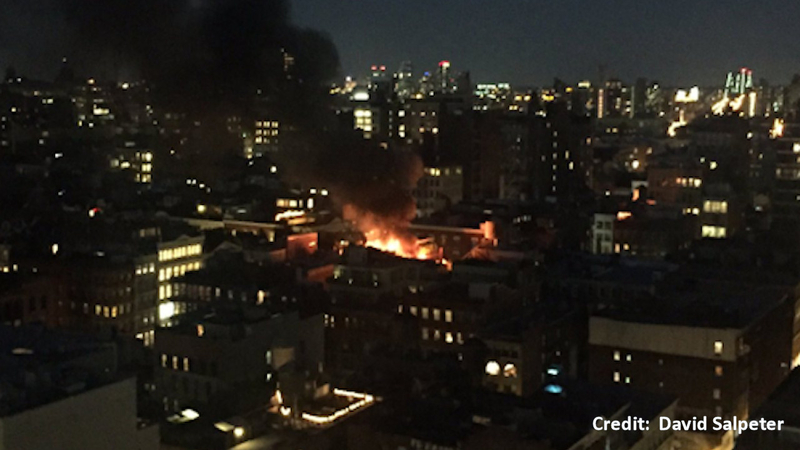 Firefighters told residents to stay inside and keep their windows closed.

That fire ripped through the building on Greene Street between Broome and Grand.

The flames spread to each adjoining building, in each direction, forcing dozens to evacuate.

The smoke and flames tore through the former factories, now luxury loft apartments.

Terrified residents ran for their lives.

Soho Manhattan building on fire... fdny get there soon! pic.twitter.com/GD3PWyYUKr

"There was just huge banging on the door. They sent everybody out," a resident said.

"I went for my wallet and my passport. I grabbed my baby and my dog and ran down the stairs. When we came down, we just saw a bunch of smoke coming out of the next building. It was really scary," a tenant said.

Firefighters say it started on the roof of 51 Greene Street just after 8 p.m. and almost immediately spread to the buildings on either side.

The response grew to three alarms.

"Extremely tall ceilings. We had to get extra-long hooks to pull the ceiling down because the fire started on the roof, it burned down into the roof," said Dep. Asst. Chief Roger Sakowich, FDNY.

"These buildings are old. There made of wood with a brick frame. Poof, they go up," a resident said.

The ordeal was especially frightening for the woman who lives in the apartment where the fire started. Her dog had been in there. She was out to dinner.

After a few heart stopping minutes, there was a reunion and a happy end to a scary night.

Champion was found safe from the #SOHO fire.

Fire under control with no injuries reported. pic.twitter.com/ps6yNcoLx4

The fire was placed under control shortly before 9 p.m.

The good news is there was no loss of life. There were no injuries of civilians.