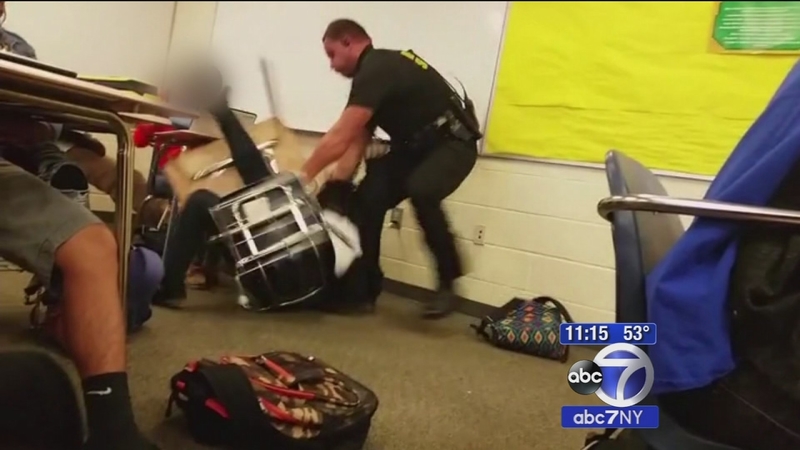 COLUMBIA, SC -- A girl who refused to surrender her phone after texting in math class was flipped backward and tossed across the classroom floor by a sheriff's deputy, prompting a federal civil rights probe on Tuesday.

The sheriff said the girl "may have had a rug burn" but was not injured, and said the teacher and vice principal felt the officer acted appropriately. Still, videos of the confrontation between a white officer and black teenager stirred such outrage that he called the FBI and Justice Department for help.

Richland County Sheriff Leon Lott suspended Senior Deputy Ben Fields without pay, and said what he did at Spring Valley High School in Columbia made him want to "throw up."

"Literally, it just makes you sick to your stomach when you see that initial video. But again, that's a snapshot," he said.

Videos taken by students and posted online show Fields warning the girl to leave her seat or be forcibly removed on Monday. The officer then wraps a forearm around her neck, flips her and the desk backward onto the floor, tosses her toward the front of the classroom and handcuffs her.

Lott pointed out at a news conference that the girl can also be seen trying to strike the officer as she was being taken down, but said he's focused on the deputy's actions as he decides within 24 hours whether Fields should remain on the force.

"I think sometimes our officers are put in uncomfortable positions when a teacher can't control a student," the sheriff said, promising to be fair.

Email, phone and text messages for Fields were not returned.

The deputy also arrested a second teenager who verbally objected to his actions. Both girls were charged with disturbing schools and released to their parents. Their names were not officially released.

The second student, Niya Kenny, told WLTX-TV that she felt she had to say something. Doris Kenny said she's proud her daughter was "brave enough to speak out against what was going on."

Lt. Curtis Wilson told The Associated Press in an email to "keep in mind this is not a race issue."

"To be thrown out of her seat as she was thrown, and dumped on the floor ... I don't ever recall a female student who is not of color (being treated this way). It doesn't affect white students," Randolph said.

The sheriff, for his part, said race won't factor into his evaluation: "It really doesn't matter to me whether that child had been purple," Lott said.

Tony Robinson Jr., who recorded the final moments, said it all began when the teacher asked the girl to hand over her phone during class. She refused, so he called an administrator, who summoned the officer.

"The administrator tried to get her to move and pleaded with her to get out of her seat," Robinson told WLTX. "She said she really hadn't done anything wrong. She said she took her phone out, but it was only for a quick second, you know, please, she was begging, apologetic."

"Next, the administrator called Deputy Fields in ... he asked, 'will you move,' and she said 'no, I haven't done anything wrong,' Robinson said.

"When I saw what was going to happen, my immediate first thing to think was, let me get this on camera. This was going to be something ... that everyone else needs to see, something that we can't just let this pass by."

"Kids are not criminals, by the way. When they won't get up, when they won't put up the phone, they're silly, disobedient kids - not criminals," said John Whitehead, founder of the Rutherford Institute, a nonprofit civil liberties and human rights organization.

Police should guard doors to "stop the crazies from getting in these schools," Whitehead said, but "when you have police in the schools, you're going to run into this - having police do what teachers and parents should do."

The National Association of School Resource Officers recommends that schools and police agree to prohibit officers "from becoming involved in formal school discipline situations that are the responsibility of school administrators."

The Rev. Jesse Jackson called the video a "national disgrace."

"This man should be arrested, charged, fired and sued," Jackson said on his way to Columbia. "The department should be sued."

Mayor Steve Benjamin also called for an independent investigation. School Superintendent Debbie Hamm said "the district will not tolerate any actions that jeopardize the safety of our students." School Board Chairman Jim Manning called the deputy's actions "shamefully shocking."

Fields has prevailed against accusations of excessive force and racial bias before.

Trial is set for January in the case of an expelled student who claims Fields targeted blacks and falsely accused him of being a gang member in 2013. In another case, a federal jury sided with Fields after a black couple accused him of excessive force and battery during a noise complaint arrest in 2005. A third lawsuit, dismissed in 2009, involved a woman who accused him of battery and violating her rights during a 2006 arrest.