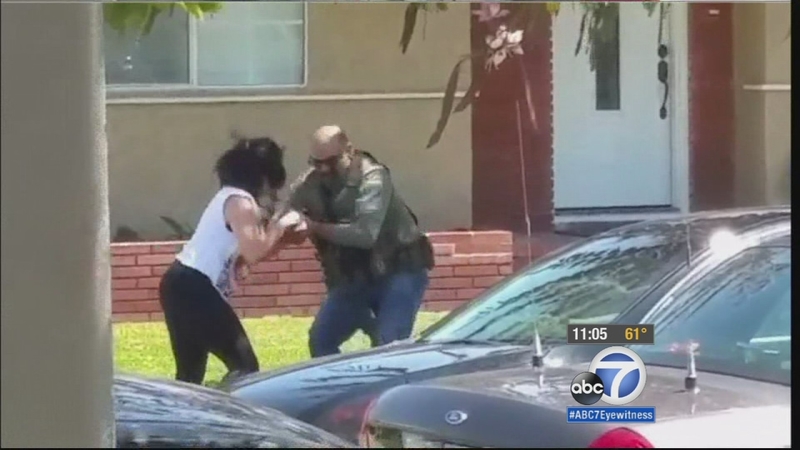 SOUTH GATE, Calif. -- South Gate neighbors are raising questions about a deputy U.S. marshal seen seizing the cellphone of a resident, smashing the device then kicking it away.

"He told me I was interfering with their investigation, but I said I was on public sidewalk, and I had the right to film them," says Beatriz Paez.

The U.S. Marshal Service confirms it is investigating the incident, which was captured on another cellphone by a neighbor and posted on YouTube.

"He threw everything on the ground. He stomped on my phone with his boots several times, violently, and then he kicked my phone. When he came toward me, I was terrified. I thought he was going to beat me up. I feared for my life," Paez said.

Paez, a teacher, has hired a lawyer who alleges a violation of constitutional rights.

"Everyone has the right to videotape and document police activity in public," said attorney Colleen Flynn.

Neighbors say the sweep was aimed at members of the Mongols bike gang, which gathers in the neighborhood every month.

Paez says she was alarmed by the police presence on a Sunday afternoon, guns pointed at young men laying face down on the lawn.

Paez says that she was more than 75 feet away from where the suspects were, that her fears stemmed from the officers approaching her and that her phone was her protection.