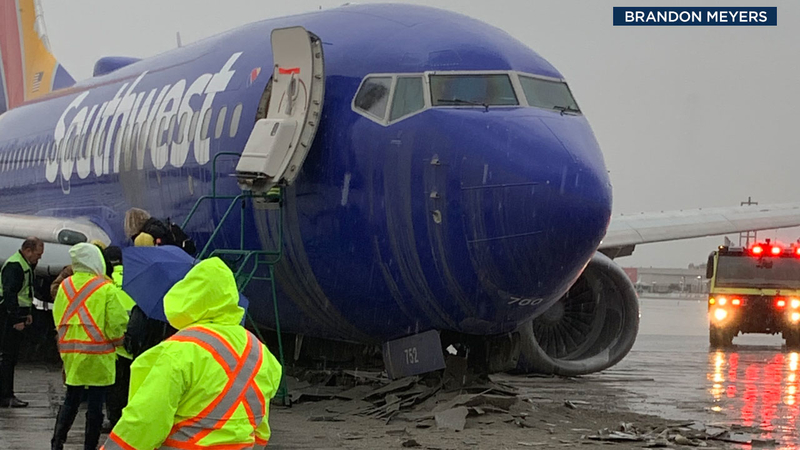 Southwest flight skids off end of runway at Burbank Airport

BURBANK, California -- A Southwest flight rolled off the end of a runway at Hollywood Burbank Airport after wet conditions made for a tougher landing Thursday morning.

An FAA spokesman said Southwest Flight 278 rolled off the end of runway 8 while landing at the airport shortly after 9 a.m. It ended up in an area called the Engineered Material Arresting System (EMAS).

EMAS is a safety system designed to stop planes if they go off the end of a runway, according to the FAA. Wheels from a plane sink into soft material to stop it.

Passenger Moe Storch tweeted out a photo saying the runway was wet from the rainstorm, causing the plane to hydroplane after landing. He said the pilot was quick and regained control of the aircraft to stop it safely.

Closer to the back wall than we would prefer... excellent job of the pilot regaining control of the aircraft!! #burbank @SouthwestAir pic.twitter.com/9IZ8Gf51jx

Another passenger, Grant Palmer, recalled how it felt when the plane landed.

"As we landed you could feel the brakes. I fly out of Burbank a lot so I know that you have to hit the brakes. It's a short runway. Then mud started hitting the windows, you could see smoke and water and I started noticing the plane going sideways. Then we came to a stop and I noticed we were right up against a retaining wall," he said.

Palmer said he ended up getting into an emergency preparedness tuck and his coworker appeared to be fine.

The passengers were deplaned by stairs and taken to their terminal by a bus.

From outside the aircraft #burbank @SouthwestAir pic.twitter.com/9jg8fVYr07

A witness inside the airport captured the landing on video.

@fly_BUR @SouthwestAir plane stops at very end of runway at the Hollywood Burbank Airport during a landing in heavy rains. Does not appear to be any injuries. pic.twitter.com/00kYTMDjG1

The airport remained open and operational, but several flights were canceled due to the FAA inspection on the runway.

UPDATE: Some flights have been cancelled or delayed due to the incident. If you're traveling through BUR today, please check your flight status with your airline before coming to the Airport. https://t.co/sM3Hf7EXAZ

The plane flew out of Oakland around 8 a.m. with 112 passengers and five crewmembers.