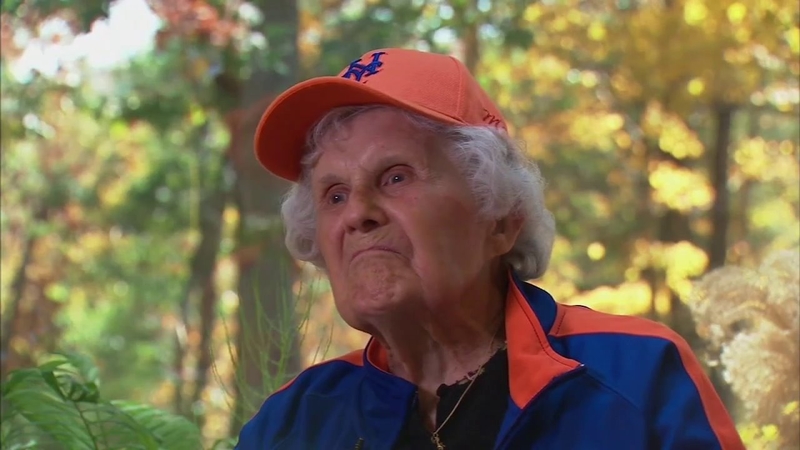 BEDFORD (WABC) -- At 100 years young, Adeline Russo might be the oldest Mets fan alive. And she's definitely one of the most die hard fans around.

The Bedford woman watches every pitch, even in seasons when the Amazins' are dead last. Russo also attended every home game of the 1986 Mets World Series.

"Being right there, that's what you really do," she said. "You see the TV, I enjoy TV, but you have to be there to really enjoy it."

Russo was born in 1915 and raised in Brooklyn, so she started out as a Brooklyn Dodgers fan. But when the team moved to Los Angeles in 1957, she jumped ship.

"I had no use for them," she said. "They gave up Brooklyn for California."

So when the Mets formed in 1962, she became a season ticket holder. And she remembers when a seat behind first base cost only 50 cents.

Her son Gerry says you can tell how the team is doing just by the expression on her face.

"My mother watches the games with intensity alright," he said. "Die hard fan, roots like hell while the TV is on. You can hear her three rooms away, and she'll say, 'This guy can't hit, get 'em out of there, what's wrong with his pitching?'"

Gerry says that if you're a Yankee fan, she'll throw you right out of the house. Because after all, you wouldn't be a true Mets fan unless you have a healthy dislike for that other team across town.

"Never had any use for them," she said of the Bronx Bombers. "Never. Because when they beat us for the series, they laughed like fools at us. Laughing like hell."

So after a win-or-go-home game five of the NLDS with her favorite player, Jacob deGrom, on the mound, you can bet Russo will be glued to the TV for the NLCS.

Wednesday was her 100th birthday, but she says if the Mets win the World Series again, that will be the day she will always remember.